"That's death on four legs, mate."
―A British soldier's remark on the appearance of a Widowmaker.[src]

Widowmakers are a large strain of Chimera. In Resistance: Fall of Man they are the approximate equivalent of a main battle tank, and in Resistance 3 they are Feral Chimera.

Widowmakers are arachnoid-like creatures that make use of their barbed fore-talons to attack enemies though they have been observed to make use of explosive globules that they spew out in combat much like the Sapper. The Widowmakers are bred by the Chimera, rather than constructed from human bodies, as standard Chimeran foot soldiers and other larger variants are. This implies that the Chimera have brought Widowmakers in from somewhere else-quite possibly from an extraplanetary source (not from Earth).

Human forces are known to suffer from a high rate of casualties when engaging these beasts. However, in addition to serving a heavy support role for the Chimera, the Widowmaker has been known to have a rallying effect on the various Chimeran strains. As such, the presence of a Widowmaker on the battlefield can turn the tables for the Chimera causing an imminent defeat to become a victory. Attacks with high-explosives or vehicle-mounted weapons should focus on the creature's face or body.

The Widowmaker first appears in the London level "Ice and Iron" after a VTOL brought a M-12 Sabertooth near Nathan Hale's position, and later in Thames, and Tower. Widowmakers are the most well-armed, defensive, toughest and arguably the most dangerous Chimeran strain encountered in the whole game.

That same strategy can be applied in the level where, after the ride in a Stalker, you encounter yet another Widowmaker. Remember to keep moving when fighting a Widowmaker, because it attacks with its legs, and has a long range attack with it's globules, unlike the Sapper.

Widowmakers makes a return to Resistance 3 and have been drastically altered from their original appearance; they appear more massive than in Fall of Man, and seem to have a general build change as well, and has a more spider-like appearance. The Widowmakers are among the many feral Chimeran strains that were rejected from the Chimeran hierarchy, and are hostile against military Chimera. Due to mutations, Widowmakers developed more resistant carapaces, and retain both their powerful, penetrating tarsi and the ability to spit toxic acid on their targets.

Interestingly, Widowmakers have gender identity; females can be identified by their red spots on their necks, as mentioned by Charlie Tent. The strain's males unprecedentedly travel in packs as witnessed by Doctor Malikov and Joseph Capelli in Pennsylvania. Widowmakers also seem to have control over Grims and Leapers, as they have been observed to summon them upon contact with survivors. They are encountered as bosses only twice in the game, in Plan B and Commitment.

The Widowmaker, then known as the 'Spider Walker', was originally supposed to be a mutated bull or horse. 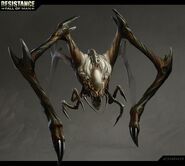 Size chart comparing a Widowmaker to the other Chimeran strains.

A photo taken of a Widowmaker, towering above the defensive barrier at Liverpool.

A Widowmaker seen as a cameo in the background in the live-action trailer of Resistance 3.

Concept art of a Widowmaker behind John Paquette, lead writer of Resistance 3 during a Gameinformer interview.

Artwork for Resistance 3 featuring a Widowmaker.

A pack of Widowmakers preparing to overrun the train carrying Joseph Capelli and Dr. Malikov.

Concept art of a Widowmaker chasing the train carrying Capelli and Malikov.

A Happy Holidays card made by Insomniac featuring a Widowmaker.