Where Mightmares Live is the fifth campaign level of Resistance: Retribution.

Major Cartwright and Colonel Parker send Grayson on his mission to Paris.

Secrets of the Maquis[] 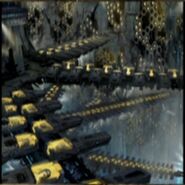