In 1898, during the events of the Cuban War of Independence, the USS Maine was sunk under mysterious circumstances. Such an act provoked outrage amongst the American populace. However, President William McKinley was narrowly able to avert war by issuing an ultimatum to Spain, who reluctantly agreed to grant Cuban independence. This sparked America's gradual descent into isolationism that would serve as American foreign policy for decades to come. Once again, American isolationism would come into effect when President Woodrow Wilson was unable to convince Congress to issue an act of war against Germany during the Great War in 1917.

Regardless, the American government did not remain idle and invested heavily in the military following the discovery of Chimeran technology in the 1930s. These investments paid off, as it resulted in several scientific breakthroughs, including the world's first digital computer and improvements to Nikola Tesla's Vertical Take-Off and Landing designs. It was also during this time that President Franklin D. Roosevelt was elected and he loosened America's isolationist policy, largely by establishing aid to the United European Defence. However, his build-up of the U.S. Navy to secure shipping lanes across the Atlantic drew derision from pro-isolationist politicians such as Robert Taft, and future President Noah Grace.

The friendly relationship between the UED and the United States came to an abrupt halt when pro-isolationist candidate Noah Grace was elected President. Cutting off military aid to the UED, Grace instead opted to continue the buildup of the armed forces domestically, especially when he became aware of the Chimera's existence. The further buildup led to the development of the world's first nuclear weapon in June 1944. However, such a powerful weaponry would be utilized solely for the defense of America and not to assist the beleaguered European forces against the Chimera when the Chimeran War broke out in late 1949.

America's strict isolationist policy continued until July 1951, when the American government finally agreed to militarily support the United Kingdom and its resistance against the Chimera on occupied British soil after the British offer them a captured Angel.

Deploying via aircraft carriers off the shores of the British Isles, U.S. military forces deployed the 1st Ranger Regiment and the 3rd Ranger Regiment to oversee the safe arrival of its shipments and meet up with British forces to deliver the shipments in exchange for the Angel in York during Operation Deliverance. Before the two groups could meet, however, the British were ambushed by Chimeran forces in Manchester. Largely due to the censorship plaguing the United States, the Rangers were left unaware of the true nature of their enemies, and assumed that they were fighting Russian military forces. Caught off-guard, much of the Rangers initially deployed were quickly wiped out by Chimeran artillery. With scattered elements around York, the surviving Rangers were rallied under Captain Winters and established a last-minute defense in York's bus terminal. Despite fighting an Chimeran assault on the terminal, the entire regiment was utterly decimated by Spire missiles.

Only one soldier survived the assault, Sergeant Nathan Hale, due largely to his induction in Project Abraham that rendered him immune to the Chimeran virus. Hale himself joined the British resistance in their fight against the Chimera, notably participating in several offensives including Operation Shear and the defense of Southern Command, and his involvement proved paramount to the British's successes.

U.S. military forces later joined forces with the British under Colonel Rachel Parker in Cardiff and launched an assault on the Chimeran tower in London. The joint Anglo-American forces were reinforced with air support and M-12 Sabertooth tanks, arriving in Thames and then entering London, culminating in the Battle of London. Through the efforts of Nathan Hale, the tower was destroyed and all Chimeran forces in Britain were eradicated. A day after the battle, all American forces in Britain were later recalled back to the United States, largely in anticipation for the imminent Chimeran assault on the American mainland.[1]

By August 1951, the Chimera expanded their assault on America, in which the nation lost most of the Northeast and the upper Midwestern states. The badly outnumbered and outgunned U.S. military forces barely managed to hold the Chimeran advance for a short period until the nation's downfall on May 28, 1953. Additionally, because of concerns over the fighting ability of the U.S. military, much of the fighting that took place on the American mainland was fought largely by SRPA and its elite Black Ops supplementing the Armed Forces. The remainder of the U.S. Army was posted at the Liberty Defense Perimeter to defend the civilian population within the Safe Zone.

However, in spite of the considerable defenses put up by the military, the Chimera deployed its Chimeran Fleet on May 15, 1953 and quickly devastated military installations on both coasts of the United States, during which nearly 60% of the Armed Forces were killed within the first 72 hours of the assault. With much of its manpower sapped, and the Liberty Defense Perimeter destroyed, alongside much of the remaining U.S. government cabinet, the demoralized remnants were forced to quickly retreat to Louisiana, which held the last surviving protection camp in Baton Rouge.[2]

As a result of its sapped strength, aside from holding the protection camp, the U.S. military were unable to provide further support to SRPA during Operation Black Eden. Despite the tactical success of the operation, resulting in the annihilation of the Chimeran fleet and the death of Daedalus, this did not stop the Chimeran offensive, and sometime after Black Eden, the Army suffered two major blows. The death of military hero Nathan Hale by Joseph Capelli was negatively received by rank-and-file members, as was the destruction of the Baton Rouge protection camp, which had previously held the remaining three million survivors of the LDP.

Badly demoralized by America's downfall, much of the remaining military quickly retreated and scattered into different outposts across the country, awaiting further orders. SRPA, the only government agency still active after Black Eden, quickly determined that the fission bomb kickstarted the Chimeran tower in New York City which activated the wormhole. SRPA theorized that the wormhole led to the Chimeran home world. As a result, President Thomas Voss quickly issued a plea and was able to rally the remnants of the U.S. military to attack the New York tower. The attack took place on July 4th, to coincide with the nation's birthday. However, the attack failed and the military suffered extreme casualties. By the end of 1953, with the already depleted Armed Forces in disarray, they were unable to effectively combat the Chimera as an fighting force and with little semblance of a command structure, the Army was disbanded and remaining soldiers were left to fend for themselves.[3]

The Marine Corps were mentioned in the intel for the M5A2 Folsom Carbine in Resistance: Burning Skies. Interestingly, the U.S. Army Ranger's rucksacks are also labeled USMC. However, the Marine Corps is not physically seen throughout the series. Former Sentinel Joseph Capelli was a member of the Marine Corps, prior to participating in Project Abraham and being transferred to the SRPA.[4]

The United Stated Navy were present at the beginning of Resistance: Fall of Man and briefly mentioned in Resistance 2. In the first game, VTOLs are seen taking off from aircraft carriers, as per the task force's deployment during Operation Deliverance. Interestingly, the naval carriers seen in the intro and on the USS Lexington only seem to carry VTOLs and does not carry any fixed-wing aircraft.

The navy is also mentioned as having played a large role in what American media dubbed "Operation Aloha", after President McCullen ordered 170,000 selected American citizens be evacuated to the Hawaiian Islands to preserve American culture. The navy served as the main line of defense for the islands, before the entire fleet and all of the evacuees disappeared without a trace under mysterious circumstances in July 1953.

The USAF plays a large role throughout the series, in the form of air support and VTOL transports. The Air Force exclusively operate the F-86 Sabre, U/AV-17 Hawk and the C-130 transport aircraft. They are first seen providing support for Nathan Hale and the U.S. Army during Operation Deliverance, where many are quickly annihilated by Chimeran mortar and Stalker units. During the events of Resistance 2, the Air Force's role is expanded as they once again assist Nathan Hale and the Sentinels in their battle against the Chimera during multiple events and also participated in the defense of Mainland United States.

During the events of Resistance 3, only littered wrecks of its military transports are found in New York, as part of the military's failed attack on the Chimeran tower in New York.

The United States' standard issue weaponry was the M5A2 Folsom Carbine. Certain experimental weapons such as the Hailstorm and Sapper have been circulated throughout its Special Forces as well. The Armed Forces are also armed with real-life historical weapons, such as the M1911 pistol (seen on Joseph Capelli and a Black Ops restraining Sgt. Hale) and the Browning M2 .50 cal machine gun.

Captain Winters and US Rangers with sniper rifles. 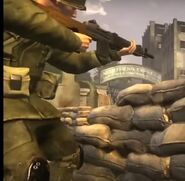 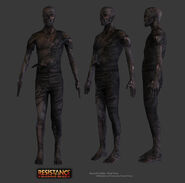 Concept art of a burned soldier.

U.S. soldiers as they appear in Resistance: Burning Skies.

A U.S. Army soldier is pinned down by Auger fire. 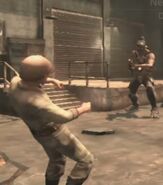 A U.S. Army soldier is shot by a Steelhead.