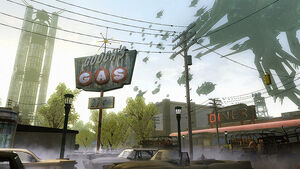 Twin Falls is the largest city of Idaho's Magic Valley region and the seventh largest in the state. As the largest city in a 100-mile (166-kilometer) radius, Twin Falls serves as a regional agricultural and commercial center for both south-central Idaho and northeastern Nevada.[1]

Twin Falls became situated near the border of the Liberty Defense Perimeter and was noted for having Liberty Defense Towers and a military presence in the city. Sentinel Benjamin Warner used to live in Twin Falls with his family before becoming a Sentinel, and had helped to construct a bomb shelter in the center of the town in the spring of 1952.

During Daedalus' assault on America in 1953, Chimeran ground forces approached Twin Falls' Liberty Towers and disabled them, and allowing a massive spire attack upon the city which ultimately left the entire population either dead or infected. After the attack many residents turned into Grims.[2] Echo Team later crash landed in Twin Falls following their mission to destroy a Chimeran warship, and was tasked with stopping a sub-fleet of Chimeran ships from breaching the boundaries of the Defense Perimeter by reactivating the Liberty Towers. Echo Team fought their way to the towers in which Lt. Nathan Hale fought and defeated a Mother Spinner in one of the towers, and successfully reactivating the towers and allowing to destroy the sub-fleet.