A Terraformer is a massive Chimeran orbital weapon that creates strong weather patterns akin to a hurricane and design in drastically changing Earth's environment in order to make it hospitable for Chimeran existence. Terraformers are at least 10 kilometers in height as one is seen to tower out of the Earth's atmosphere.

Terraformers are also used to cleanse an entire area, in which it kills anything within miles whether underground and or above. Terraformers appear to also serve in pacifying human resistance cells and settlements, as one was used in completely obliterating Haven. The Terraformers are part of the Chimera's intentions to completely cool down the Earth and wipe out the remnants of humankind in the process, and apparently terraform the planet, making it suitable for the Pure Chimera.

It is with irony that the Terraformers proved to be the downfall of the Chimeran occupation when one was used to crash into the New York tower by former Sentinel Joseph Capelli, destroying the wormhole to the Chimera's homeworld.

A Terraformer seen in the background in the 2011 E3 trailer.

Joseph Capelli witnessing Haven being destroyed by a Terraformer.

A Terraformer, and the wormhole in the distance, seen above of Earth's atmosphere.

The interior of a Terraformer.

A Terraformer crashes into the New York Tower. 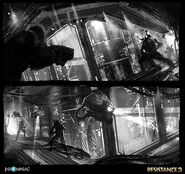 Concept art of the interior of a Terraformer. 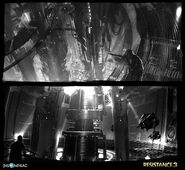