The Steelhead is a powerful strain of Chimera that are a superiorly engineered version of the Hybrid variant.

The Steelhead strain can be easily recognised from their metallic headgear they wear, hence their name. Steelheads possess heavy armor which allows them to be the forefront of any battle where they lead lower Chimeran strains in combat. They are capable, and even willing, to endure any form of punishment to advance the Chimeran invasion, even if they must die in the process.

Steelheads are taller than a Hybrid, though their stooped posture means they do stand somewhat shorter in practice. They are often considered the Chimeran equivalent of a commissioned officer and act as commanders that lead allies into battle, especially Hybrids. Hybrids are also noticeably more aggressive when led by a Steelhead. Considered much more durable then a standard Hybrid, they can even survive a direct hit from a grenade.

By 1957, Steelheads have taken on a more supportive role as they stay in the rear of the Chimeran group instead of the front, which allows them to spot and open fire at enemies with their Augers, safely behind the ranks of other Chimera. Their role of leading the charge in battle appears to have been given to Hybrids, Ravagers and Brawlers.

Steelheads are first encountered in Manchester - "The Cathedral" after Nathan Hale killed the huge swarm of Leapers that attacked and killed several British soldiers. In combat, Steelheads make use of Auger Rifles which are capable of tunneling through walls which make an assault by Steelheads almost unstoppable. They appear frequently throughout the game, often seen leading Hybrids into battle, and are known to be one of the toughest enemy infantry types.

Steelheads are first encountered in the town of Orick, where Hale travels in, in order to reach the Chimeran battleship.They appear more slimmed down and have a different type of armor on their head. They are however, much better fighters in close quarters than in Fall of Man, and have a powerful kick in the Co-op campaign. If within close-quarters, Steelheads will fight with their hands rather than using their Augers. They are armed with the newly standard Auger Mark II, and are seen leading even Titans into battle. Their size also varies, as seen in the co-op mode, with Steelhead Overseers being as large as Ravagers. They are often seen fighting alongside Ravagers, who probably command and lead the Steelheads. Like Hybrids, they now have full access to their weapon's features, including the energy shield, which they deploy often.

Steelheads are also the most common elite Chimera (Primarchs and Overseers) seen in co-op. The highest ranked command structure yet encountered in Resistance 2, was comprised of 5 Steelhead Overseers, in Holar Tower, Iceland. However, they were assassinated by Specter Team.

Steelheads are first encountered in Bonn level of "Waterfall Chamber", where James Grayson attempt's to rescue Raine Bouchard by following the tubes in the conversion facility in Bonn of Germany, appearing sparingly and usually alongside other enemies to maximize their lethality.

The Steelheads made their first appearance when they attacked Joseph Capelli and Tommy Dean in Haven when they tried to return back to their underground base. The Steelheads also have a different kind of head gear. If a player shoots the Steelhead's head, the helmet might get knocked off and you are able to see that the head is similar to a Hybrid's head and unlike the ones in Resistance 2.

Steelheads make their first appearance in the Dry Docks of New York, where they attack the naval base in Military Ocean Terminal. Tom Riley is able to acquire an Auger from any of the Steelheads in the level and use it. They are easy to defeat as their AI exclusively deploys a shield and fires from their current position; the shield does not cover their head or upper body, leaving them vulnerable to most weapons, and they have no response to being flanked. They will use melee attacks if the player gets too close, but otherwise they will maintain their distance.

An early concept of a Steelhead.

A journal of the Steelhead. 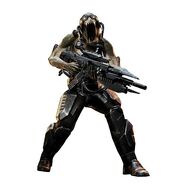 A Steelhead running towards the player. 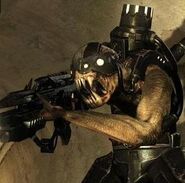 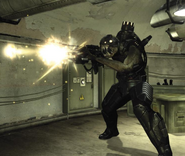 Advanced Hybrid and Steelhead figures as seen on Resistance 2.

Another view of the figures.

Nathan Hale face to face with a Steelhead.

A Steelhead wielding the Auger. 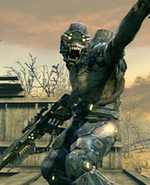