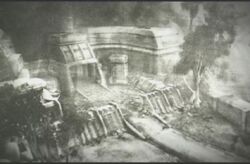 Southern Command was a British Army base located in Bristol, England.

Southern Command was the last British command post to be destroyed, and at least 50% of the base's personnel were killed.