The Sixeye is a Chimeran sniper rifle which appears in Resistance: Burning Skies, during the third mission on George Washington Bridge.

The Sixeye is a very powerful single-shot rifle with a built-in scope and the ability to fire explosive "Burr Charge" tags. Burr Charges are activated using the touchscreen and can be used in combination with the scope; they will automatically hit whatever is highlighted with the cursor, and then explode after a period of time or when the icon at the bottom of the screen is pressed. Only one Burr Charge can be deployed at a time. 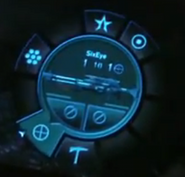 The Sixeye weapon icon seen in an early version of the weapon wheel.

The Sixeye's icon as seen in the weapon wheel. 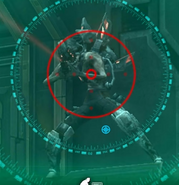