View source
watch 01:36
We're Getting Mutants in the MCU - The Loop
Do you like this video?
Play Sound

The Rossmore 236 Combat Shotgun is a combat shotgun with devastating stopping power and used by the British Army for base defense and urban warfare, and it is worth noting its ruinous damage, especially in close quarters engagements. The Rossmore 236 is exclusive to Resistance: Fall of Man.

The Rossmore is acquired in Grimsby "Fate Worse Than Death", under the stairs in the Chimeran Conversion Center, after destroying four Chimeran laser mines. The Rossmore fires a single round shot and its secondary fire allows it to fire a double-barrel shot at one time; however, each shot is weaker and less efficient to compensate for the fact that both barrels are used. This attack requires a longer time to recover from, but increases the odds of hitting an enemy from farther away. 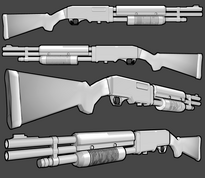