Major Richard Blake was a high-ranking official of SRPA, holding the position of Director of Advanced Tactical Ops and Commanding Officer of the Sentinels. During the Chimeran War, Blake led the defense of the United States against the Chimera, organizing and leading ground assaults and other missions. He is a supporting character in Resistance 2.

Nothing is known about Blake's life prior to joining SRPA. He became a Major in the Army and at some point joined SRPA and became Director of Advanced Tactical Ops. After Project Abraham, Blake became a Sentinel, although he rarely went into battle, so he did not require much medical treatment or therapy, such as inhibitor treatments.[1]

At the orders of SRPA Executive Director Lyle K. Parsons, Blake organized the capture and retrieval of Sergeant Nathan Hale when intelligence about Hale was received, revealing his apparent resistance to the Chimeran virus. Blake personally led a Black Ops team to Britain, where they successfully retrieved Hale following the Battle of London. Afterward, they proceeded back to SRPA Station Igloo in Iceland with the intention of inducting Hale into the Sentinel Program.

Unfortunately, Station Igloo came under attack by Chimeran forces upon their arrival. The VTOL they were on was shot down, but both Hale and Blake survived. Acting quickly, Blake organized the evacuation while fighting through the base alongside Hale. He went to initiate the kill code to destroy Daedalus; however, the code failed, and Daedalus was accidentally released. Blake and Hale managed to escape the base with Dr. Fyodor Malikov, flying back to the United States.

Blake directed SRPA operations during the early phase of the Chimera's invasion of America. On November 16, 1951, Blake organized a Search and Recovery team led by Nathan Hale and Captain Anton Nash to Bear Butte in salvaging a downed Chimeran shuttle. He was questioned by a disgruntled Hale about the necessary of having Nash, who is totally inexperienced in combat, into his team; in which Blake reasoned that Nash have the utmost knowledge on Chimeran technology in recovering what is needed from the crash and having Hale himself, who is more battle-harden, as the reason for being on the mission to see it succeed. Although Blake's presumptions goes almost exactly it had intended in which the Sentinels retrieved a databank on nuclear fuel from the shuttle, Nash was ultimately killed.

On November 23, Blake was outrage to learned about Hale's three-days absence from venturing to his former home in Chimera-occupied South Dakota and costing the loss of military equipment. However, he decided not to see the trouble of court martialing Hale and instead docked him for the lost equipment and the used VTOL fuel from his pay. Blake later organized Operation Iron Fist in coordination with the 5th Ranger Battalion in allowing Hale and Dr. Linda Barrie in infiltrating a Chimeran facility and retrieving nuclear cell fuels based on the recovery from Bear Butte.

On December 3, Blake was briefed by Chief of Staff William Dentweiler about Secretary of War Henry Walker's defection and supposed treachery in trying to communicate with the Chimera. In which Dentweiler ordered SRPA on Walker's capture or death; however, Blake overruled Dentweiler about the latter action as assassination is strictly prohibited for SRPA's personnel based on the organization's charter and basically followed in apprehending Walker.

On December 25, Blake was present in Sheridan, Wyoming while over-watching the negotiations between President Noah Grace and Daedalus. Blake expressed his disgust over this as he briefed to Nathan Hale over the recent negotiations. After Grace was killed by Nathan and Daedalus' eventual escape, Blake and government agents arrived at the scene hwere he calmly stated of notifying Vice-president Harvey McCullen of his ascendancy as president and simply ordered Hale to continue his fight against the Chimera.

Two years later, on May 15, 1953, the Chimeran Fleet begins an massive assault on America. Blake was stationed at SRPA 3 in San Francisco that was attacked by incoming Chimeran forces. Blake was in SRPA 3's central control station at the time, and that room just happened to be the first part of the base that was attacked by a Kraken; the Kraken's attacks caused the room to flood. Blake (and presumably other personnel in the room) escaped and ordered an evacuation of the base.

From some unknown location, Blake continued behind the scenes leading and coordinating SRPA missions and defending the country, and was mostly responsible for the border defenses for the Liberty Defense Perimeter. He directed Echo Team on their missions in Orick, California and Twin Falls, Idaho. After the latter mission in Twin Falls was completed, Blake ordered Echo to received emergency inhibitor treatment, yet Hale refused and instead goes to Station Genesis in Bryce Canyon, Utah to rescue Dr. Malikov, despite Blake's objections. Blake finally conceded to Hale's reasons when he contacted him at Bryce Canyon and informed him that the Chimera were pushing through the country and out-thinking them, and that the only way to stop them is with Malikov's help. After Echo rescued Malikov, Blake later overseen SRPA's assault on a Chimeran hub tower in Chicago in order to prevent the Chimera from activating the tower network within the region. Although SRPA were successful in shutting down the tower. However, Daedalus was able to reactivated the tower from Iceland.

Blake immediately launched an assault on the Holar Tower to stop Daedalus. Unfortunately the Chimera laid a trap and many SRPA forces were killed. In response Blake ordered his forces to fall back. Following the botched assault, the Liberty Defense Perimeter soon fell afterward and the Chimeran Fleet gathered at the Chicxulub Crater in Mexico. After fighting for six weeks, Blake led X-Ray Squad in an attempt to take a fission bomb to the field H.Q. in Cocodrie, Louisiana in preparation for Operation Black Eden, in which the plan was to plant the bomb on the Chimeran flagship and destroying it along with the fleet. Blake went missing en-route to the H.Q after his convoy was ambushed by Stalkers. The Major was later founded with X-Ray Squad by Nathan Hale and Joseph Capelli, in which they proceeded to escort the bomb and board the Chimeran flagship through an acquired Chimeran shuttle.

On board, Blake went with X-Ray Squad and attempted to move the bomb closer to the ship's engine room while Hale and Capelli went to the bridge to direct them. On his way there, he and X-Ray squad were overwhelmed in a Chimeran ambush. Radio contact was lost after this, and it is later revealed that Blake and the others had been killed. Hale was then forced to carry on where Blake left off and was successful in destroying in the fleet.

Blake appears to be mostly calm and patient. He also can be quick to anger in a high pressure situation if it is called for. He can also be quite convincing. He is a firm leader to his men but he also applies a large level of respect and trust to them and so he receives it back greatly. He is informative to his men and tries to keep very little secrets to maintain an element of trust. He is a quick and resourceful leader and can think out the best solution when it matters most. He usually directs battles via radio link from a base and is rarely seen fighting.

He does understand technical and scientific information as well, and puts it to good use alongside SRPA scientists. He has had many differences and quarrels with Malikov in the past as Malikov has led to problems such as the creation of Daedalus and Hale trying to rescue Malikov at Bryce Canyon. At times, Blake is often very skeptical of Malikov's strange theories and ideas (despite the fact that Malikov is a scientist), but trusts and accepts his ideas.

Blake is a tall man with prominent brows, cave-like eyes, and a pugnacious jaw. He has dark eyes with short dark-brown hair. He has a parade-ground voice. He wears a black SRPA T-shirt and green armor padding on his torso like that of the Black Ops. He wears a headset on his ear for communication like the Sentinels and has a pouch on his trousers. He does not usually carry a weapon unless in the middle of combat and if so it is usually a standard issue M5A2 Folsom Carbine. Blake was very resourceful, and also carried a HE .44 Magnum as a backup weapon. He has a very unusual hair style that would suit the 50's style in that he has a small wave of hair pushed to the front to make a short fringe which creates a gap all along the back of his hair. 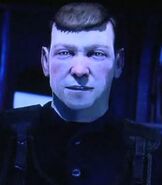