Ravagers are a Chimeran strain that first appears in Resistance 2.

Ravagers are engineered as a physically superior Chimera. They are noticeable for their tall stature and musculoskeletal mutation which makes them dangerous and powerful as ten Hybrids.[1] The strain are armed with powerful weapons such as the Brute Minigun, and are brutal melee fighters who will often charge full speed at their targets.

Ravagers are almost always accompanied by other Chimeran units such as Hybrids. They are considered to be the strongest regular Chimera strain infantry on the front lines, even more so than Steelheads. They are the successors to the Brute strain, which were deployed by the Chimera in Europe before 1953.

Ravagers first appear in San Francisco. They wear heavy armor (particularly on their legs), which gives the Ravagers excellent defence. Ravagers are equipped with either one of two types of equipments/weapons, one is the Brute Minigun and the other is a plasma gun with portable shield.

Ravagers are deployed mostly solo or in small squads, the largest groups being as big as five, and when together, are usually led by a larger Ravager (these Ravagers are probably Primarchs or Overseers due to them being significantly stronger than the others). Ravager Primarchs and Overseers always wield Brute Miniguns.

Ravagers are revamped with a more threatening appearance and are armed with the Atomizer. Ravagers are able to withstand a lot of damage, even more than in Resistance 2, as multiple headshots from the Deadeye or Marksman are required to kill it, except if the Deadeye's Proton Charge is used. The Ravagers first appear in Friends in Low Places after Joseph Capelli have helped the Remnants fight the first wave of Chimera at the disabled VTOL. The Ravagers seem to be armed with a triggered Force Barrier (much like an Auger's Force Barrier) that stops all projectiles from the front. This is not used from the Atomizer, their main weapon, but apparently triggered from some device hooked onto the Ravager's heat stack. This is most likely a similar ability to Resistance 2's Ravagers, being armed with a large Force Barrier device whilst using their signature plasma guns. Unlike Steelheads the Ravager's shield is attached to its body. 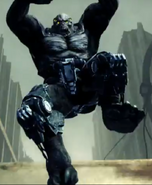 A Ravager jumping off a bus in St. Louis.

A Ravenger armed with an Atomizer leads a squad of Hybrids in St. Louis.