Rachel Parker is a British Colonel and British Intelligence Operator. She is a main character and the narrator of Resistance: Fall of Man and Resistance: Retribution.

Rachel Parker was born the daughter of a three-star general of the British Army, and her father was re-stationed too often for Parker to ever know what a home was. The lifestyle was too much for her mother to bear; she left when Parker was six. Parker became inseparable from her father. Despite her desire to join him in the military, he steered her toward a university education. Her eagerness to impress him led her all the way to the theoretical physics department at Oxford. Before Parker could graduate, her father offered her the job she always wanted with British Army Intelligence. The Chimeran threat was just becoming known in British Intelligence circles, and he needed someone he could trust to be a liaison for the military.

Initially serving as an intelligence operator, Parker and her father worked closely together at Central Command in London, until the Chimera invaded Britain and attacked the base. Parker's father died helping her escape. With the deaths of the British Armed Forces' hierarchy; Parker, only a Captain at the time, became head of the British Intelligence Corps, and de-facto head of the British Resistance. At her direction, the Corps, who were given tactical control of the Royal Marine Commandos; the de-facto unit leader then Lieutenant Stephen Cartwright, ordered the Commandos in a guerrilla campaign against the Chimera. Parker had since continued to serve on the front lines in the war against the Chimera; her brilliance at collecting and interpreting strategic intelligence is the only weapon that hasn't failed against them. Parker has long since become accustomed to losing everything she's ever cared for, but wants to believe the war against the Chimera can still be won, and found herself willing to support long shots.

Rachel and her intelligence squad managed to succeed in capturing an Angel, a Chimera leader unit, and stored it in a customized containment cell. Rachel offered a isolationist United States a deal: the British would turn over the Angel (which they classified as a "secret weapon") to them in exchange for supplies and military support to liberate Britain. Inevitably, the initial efforts failed as the American 1st Ranger Regiment sent to York was wiped during Operation Deliverance, and Rachel and her convoy team were ambushed in Manchester on the way to the exchange. Rachel was captured and taken, uninfected, to a Chimeran conversion center in Grimsby. It is there she encountered Sergeant Nathan Hale, the sole remaining American survivor of Operation Deliverance, who saved her from being infected by Crawlers in a holding pen, moments after two British soldiers had been infected. With his help, she escaped and coordinated a retrieval mission for the Angel in Manchester. During later missions, Rachel began to feel different about Hale. When she first met him, she noticed his gold colored eyes and became suspicious that he had become infected. She tried to get him to be tested but Hale seemed to be avoiding her as if he knew her intentions. She began noticing more side-effects of the Chimeran virus in Hale later on. She was very curious of him as he was the first recorded person to have ever woken up after being infected (though in time she later discovered the existence of the Sentinel Program). Although she knew he was infected, she trusted that he would remain human and be able to defeat the Chimera.

During the battles at Manchester and Nottingham, Rachel routinely provided intelligence via radio to Hale and her forces while in combat on-board a VTOL, and directed Hale to destroying the Angel during the overrunning of Northern Command after they are separated. Later, after the destruction of Southern Command, the resistance's last command base and Chimera-free territory in England, Rachel and the surviving resistance retreated to a makeshift camp in Cardiff. This would be the last time she saw Hale who refused to go with her.

Hale later informed Rachel of his progress to hunt down and destroy the source of the Chimera, leading Rachel to directing the remnants of the British Army, in collaboration with fresh American reinforcements, in a final desperate attack on the Chimera's main hub tower in London. During this final assault, she directed Anglo-American forces at the entrance to the tower and later rescued a wounded Stephen Cartwright. Hale not only made sure the assault succeeded, but personally destroyed the tower, eradicating all the Angels throughout Britain, and by extension the Chimera. Hale, however, vanished in the explosion that destroyed the tower. Parker ordered her VTOL to wait for Hale but had no choice to leave when the tower collapsed.

While the Americans listed Hale as officially killed in action, Rachel was unconvinced and believed that Hale may have managed to survive as she believed that she had heard his voice radioing in afterwords. Indeed, her beliefs came true as Hale survived his ordeal and was later recruited into the Sentinel Program.

Following the liberation of Britain, Parker worked quickly, initiating restoration and rescue efforts throughout the country, restoring and re-deploying armed forces, beginning research efforts into the Chimera's mysterious history and reverse-engineering Chimeran technology alongside Special Research Projects Administration. At this time, Parker was promoted to Colonel and made official head of the British Intelligence Corps and British Armed Forces.

Parker eventually restarted the conflict in Europe by launching Operation Overstrike, with the goal of destroying the Paris hub tower, and coordinated with SRPA and the Maquis to succeed. During Overstrike, Parker commanded the Second Squadron into reinforcing Rotterdam, Holland after the remains of the First Squadron led by Major Stephen Cartwright succeeded in destroying the Chimeran gun towers providing safe passage for the Second Squadron. Parker later led British armed forces to the Maquis fortress base in Luxembourg, and find herself in fighting a massive Chimeran assault upon the stronghold. Parker escaped from the base with the help of Private James Grayson. Soon later she regrouped with Grayson and Cartwright and they escaped to Reims, France, the last remaining Maquis stronghold.

In Reims, after Allied forces finalized their plan for their assault on the hub tower in Paris, Parker and Cartwright freed Grayson, who was imprisoned by the Maquis for "insubordination", and personally provided him a sample of Dr. Claude Bouchard's serum in infecting the Chrysalis Lair in order to temporarily halting the Chimeran conversion. After the destruction of the Paris hub tower and the mass eradication of the Chimera in Western Europe, Parker met with Grayson at a small memorial dedicated for fallen human soldiers, reminding him that he should not allow Raine Bouchard's death to destroy him as he had allowed the death of his brother to do so. Parker then offered Grayson a commission with the British Army with the position of Major, but Grayson immediately refuses the offer. Parker, however, convinces Grayson to keep his brother's jacket instead of placing it upon the makeshift memorial. She and Cartwright bid farewell to Grayson, who rejoins the Maquis.

While not in Resistance 2, Parker is mentioned in numerous intelligence documents in the cooperative mode of the game.

(NOTE: The following is a summary of Parker's activities from the documents which assumes she remains in over-all command of all British military forces and that she remains alive as of Resistance 2.)

Chicago, IL: While not directly mentioning Parker, British intelligence under her command monitored the rapid conquest of Africa by the Chimera. British naval forces evacuated approximately 170,000 African refugees during the conquest.[1]

Axbridge, UK: Promoted to Colonel, Parker has deployed the majority of her forces against the Chimera on continental Europe. On December 7, 1952 the Chimera launched an attack on Axbridge which Parker believed was calculated to make her recall soldiers from Europe.[2] Instead she requests SRPA's assistance in containing the attack. In the course of the operation, Parker provided SRPA detailed plans of the nuclear reactors the Chimera use in powering the towers as well as "gray tech" recovered from several towers on the continent by James Grayson.[3]Later that month she provided more data to SRPA on the evolution of the Cloven and a recommendation not to engage them unless attacked.[4]

Bracknell, UK: In addition to the assault of Axbridge, the Chimera also attacked Bracknell on December 18, 1952 in an attempt to regain a foothold in the British Isles. Parker requested more American assistance in holding Bracknell as during this time her forces were engaged in attempting to destroy a hub Chimeran Tower in Warsaw, Poland.[5]In addition, she was directing anti-Chimera operations in southern Spain and northern France.[6]Parker also relayed more reports of strange Cloven activities observed throughout Europe to SRPA teams throughout the Bracknell attack and ordered extreme caution exercised when any of her forces engaged the Cloven. Finally, she also alerted American forces to the continuing activation and excavation of Chimeran Towers throughout Europe.[7]

Parker continued to gather intelligence and coordinate the retaking of Europe during 1953, and predicted that her forces would reach the Russian Wall by June. Parker learns that Hale survived in the Battle of London and now serves with SRPA's Sentinel Program, and so drafted a sealed letter to him.[8] It is possible that she had some feelings for him.

During the events of Resistance 3, it is unknown whether or not she is still alive and in command of the British Resistance, largely as Cartwright had been promoted to the rank of General and was leading elements of the army in Wales. Regardless, her efforts throughout the war paid off as the Chimeran threat had finally been defeated through the efforts of former Sentinel Joseph Capelli.

Rachel Parker is an intelligent person and a very capable leader. She is loyal and cares a great deal about the soldiers under her command. She can still be a firm and strict commander. She is a strong person and having being used to losing every thing she cares about, carries a fortifying attitude which she needs to lead the British in these dark times. She is more of a tactician than a soldier and always leads a battle in the air on a VTOL. She is trusting and would support any nearly-suicidal mission if it meant victory. She feels hopeful around people like Hale and Grayson, who bring out a positive and optimistic side of her. She seems to have great respect for Cartwright and the two seem to have a sort of friendship as he is her second in command. Though she is a tough soldier, deep down she a caring person who has become sick of war and will do anything to bring a swift end to the Chimera. It is also possible that she had romantic feelings for Nathan Hale.

Parker is a somewhat tall person with shining brown eyes and light brown hair that she always keeps tied up in a bow. She wears a brown jacket over a light greyish-brown uniform that signifies her position in the intelligence division and carries a radio on her back. She also usually wears leather gloves. She has a general English accent which makes it hard to tell which area of Britain she is from. 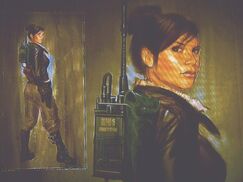