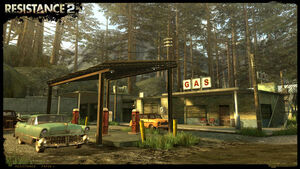 Orick is a Co-operative map in Resistance 2. It is set in and around the town of Orick, California.

A perimeter of Hellfire Turrets surround the entrance to the Grim nest. There is only one way to safetly progress past these.

The players will have to fight extremely heavy forces to activate a pair of harmonic switches. When these are activated, the shielding surrounding two power nodes will drop and a titan will teleport behind the player. When the nodes are destroyed, a Stalker prototype will have to be fought, along with a Chimera dropship that releases several attack drones.

There are two variations to this objectives. The normal one is where you must capture and defend the hill from a few waves of Chimera. The second variation is where several titans on the hill need killed (note that this only occurs when it is the last objective).

Shutting down the Grim nest

The player will need to de-activate a perimeter of Hellfire turrets to reach a large building full of Grims. Once these are achieved, the player must deactivate 4 hellfire turrets on the roof with a harmonic switch.

The player must fight their way to a harmonic switch to power down a teleporter. After that, they must kill two Steelhead Primarchs defending the entrance to the final area of the gully. Finally, they must destroy either a Stalker (if it is the last objective) or kill a few waves of enemies, followed by a Titan.