Natalie was the wife of Tom Riley and mother of Rachel Riley.

When the Chimera invaded New York City, Natalie and Rachel were briefly reunited with Tom. However, their moment was cut short in which Natalie and her daughter were forced to evacuate the city without Tom, who remained behind to help the evacuation.

Natalie and her daughter were among the refugees relocated to a Protection Camp in Union City, New Jersey. The Protection Camp soon came under attack by the Chimera, because of the machinations of former SRPA administrator Richard Gorrell, and Natalie and Rachel were abducted by Carriers and taken to a conversion center in the Appalachian Mountains.

Her husband managed to find her, but tragically, Natalie was already infected with the Chimeran virus. Natalie urged Tom that there is nothing they could do to her except finding their daughter before her husband euthanize her with a gunshot to the abdomen. 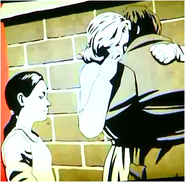