The Mutator is a improvised weapon in Resistance 3. It was created by Herbert Sawicki and designed to fire a weaponized strain of the Chimeran Virus extracted from rampant feral Leeches in Graterford Prison. The Mutator's primary fire shoots a globule causing bulbous cysts to appear on the enemy and mutating the enemy into a combustible land mine. Charging the Mutator causes faster infection of the victim. The secondary fire unleashes a diseased mist that disorients and infects large groups of enemies caught inside.

It is given by Herbert to Joseph Capelli in their attempt to escape from Graterford. 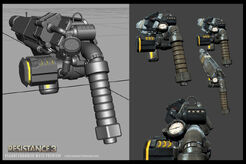