Mount Pleasant is a small coal mining town in south-western Pennsylvania. The town is also deeply religious and is led by its priest Jonathan Rose and his wife Jean. During the Chimeran invasion, half of the town was destroyed and infected. However, some of the town's population managed to survive and continued to live in the post-apocalyptic settlement.

At some point, the town was attacked by the Chimera and most of the population were either killed or infected. A Feral Chimeran creature known as Satan played a large role in decimating the population, and since then the derelict town has been overrun by Leapers, Grims and Leeches. Many of the human remnants were sent to fight it, but every attempt failed, resulting in terrible losses. The townsfolk became careful of their survival and fortified whatever part of the town they held, but by 1957 they only held a small area around the town's schoolhouse. The people of Mount Pleasant decided to stay and were willing to die where they lived, believing that God had given them their land and that they were being tested. Jean Rose stated that a group of disillusioned people later decided to leave, but only to had made it a half mile outside of Mount Pleasant before they were killed by the Chimera.

Joseph Capelli and Dr. Malikov later arrived in Mount Pleasant just after Capelli shot down an Chimeran Dropship and only hope of using the town's train to travel to New York City. However, the train was inoperable and could only be repaired by Jonathan Rose, who was missing. Malikov sent Capelli to find Jonathan somewhere inside the Chimera-infested village ruins. Capelli managed to fend off many Feral Chimera as he eventually found and rescued Jonathan in the mines. They were able to restore the power for the mine's elevator and descended deep into the mine. They were then attacked until Capelli finally killed it by throwing some acetylene tanks inside the creature's mouth before he quickly fired at the tanks, creating an explosion which blew up the upper portion of the creature's head. Jonathan was then able to fix the train, allowing Malikov and Capelli to continue their journey to New York City.

With the elimination of Satan and the closure of the wormhole, it is likely that the town population recovered from their losses and cleared the town of all remaining Chimera. 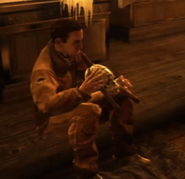 A resident of Mount Pleasant playing on a musical instrument made of a Hybrid skull.

An improvised wall built by survivors to protect themselves from the Chimera.

An advertising sign for the C&S Mining Company that can be found in Mount Pleasant.