Mother is a Chimera that appears to be a larger form of the Siren that exclusively appears in Resistance: Retribution.

Developed by the Chimera sometime after the excavation of the Chrysalis Lair in Paris, the Mother is a larger form of the Siren seen throughout Western Europe during the events of Operation Overstrike. Likely taking hundreds of human bodies to create, the Mother serves as the guardian to the Birthing Chamber in the Chrysalis Lair. Similarly to its smaller Siren counterparts, the Mother was particularly vulnerable to energy weapons, as such, weapons like the BM003 Razor, Auger-WS and Advanced Auger-FS are extremely effective against this creature.

During the Allied invasion of Paris, James Grayson had encountered the Mother as he traversed the Chrysalis Lair, with the intent of infecting the facility's "womb". Summoned through Grayson's activation of the power, both were enveloped in a breathable liquid, during which Grayson fought off several attacks by the Mother to try and consume him. Grayson was able slay the creature. 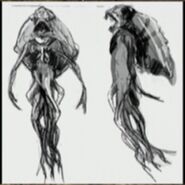 The Mother leaving her lair

The Mother tries to consume James

Crying loudly, The Mother is defeated
Community content is available under CC-BY-SA unless otherwise noted.
Advertisement