Menials are a strain of Chimera that are not intended for combat but rather the process of basic labor such as conversion. As such they are the worker caste of the Chimeran hierarchy.

Menials appears to be the the worker caste of the Chimeran hierarchy. They are known to ignore other Chimera as they mindlessly continue their duties. Such a role makes them rarely seen in combat operations as they are unarmed as well as both sluggish and non-aggressive. However, it should be noted that they are unpredictable creatures which makes them dangerous, especially when they are cornered. Menials attack by sluggishly approaching an enemy, then grabbing and biting him, or (the less common form of attack) simply hitting him.

Apparently, Menials are beginning to die out due to a lack of new bodies and the new conversion process of using Spinners.

While not making an appearance in-game during Resistance 3, a form of Menial is shown in the game's summary of the series, played during a part of the installation process. It is suggested that they were in fact the very first human-Chimera mix to ever appear on Earth due to direct contamination by the Chimeran Virus after the Tunguska Event.

Menials are first encounter in Grimsby where Nathan Hale and the other comatose soldiers were taken to be converted. Menials are not much of a threat, though they do have a habit of sneakily creeping up on the player. If the player is grabbed by a Menial, an action sequence appears in which the player must shake the Sixaxis controller to shrug off the Menial or it will bite into Hale; this is actually one of the most damaging attacks in the game, taking one full health bar for the grab and even more if the Menial is allowed to continue biting.

Menials do not make a reappearance in Resistance 2, but were mentioned in several Intel documents.

Menials only appear in the intro cutscene in the beginning of Resistance 3.

A single Menial makes only a cameo appearance in the opening prologue of Resistance: Retribution, where Johnny Grayson was infected beyond rescue before James Grayson breaks into the room and kills the Menial. 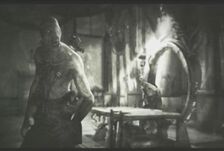 Still of Menials in the Grimsby conversion center.

A Menial about to bite the player.

A Menial lunging at the player. 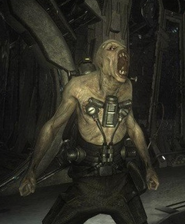 A Menial appearing in a cutscene of Resistance 3.

A Menial dragging a human victim to be converted.