The Marauder is a new strain of Chimera that appears in Resistance 2.

A Marauder is a large Chimera that towers even over Titans and vaguely resembles a Tyrannosaurus Rex. Nathan Hale encountered and fought a Marauder in Cocodrie, Louisiana, and he sees another one later in the distance on a road with Chimeran forces of varying strains while regrouping with Richard Blake.

The Marauder walks on only two legs and has no arms. A flamethrower like weapon has been installed in the creature to channel its flammable saliva for use in combat, this also causes a problem with the creature over-heating, and depends on a special cooling unit. This not only keeps it from over-heating, but also allows it to actually use its flamethrower. After killing the Marauder, the flamethrower is visible in its mouth in the place of a tongue.

Within the Chimera ranks are Marauder Overseers, which are far more damage resilient and much more damaging than the Story Campaign version. This type of Marauder looks exactly the same as the standard Marauder, and appears in Bracknell and Bryce Canyon during the Co-op campaign. Also if a player gets too close to it, the Marauder will lift up a foot and stomp the ground causing a significant amount of damage. Most notably on Superhuman mode, the Marauder Overseer is able to easily overwhelm a full squad of 8. With the exception of the advanced Titan overseer, nothing else comes close to the Marauder in terms of difficulty.

A so far unseen Chimera known as a Mauler was listed on resistance-game.com. It is described with remarkably similar traits to the Marauder, yet has a different name. At first it was thought to be a misspelling of Marauder until Resistance: The Gathering Storm identified the Mauler as a completely separate strain.

It is possible that the Marauder is a substrain of the original Mauler that is designed for combat rather than as a beast of burden, as the Mauler is described as being used for. 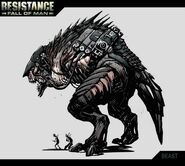