Mac is a member of the Minutemen. He is the a second-in-command of the group.

After the destruction of the George Washington Bridge, Mac brought Ellie Martinez and Tom Riley to the abandoned SRPA Station Kali on Ellis Island by boat. Before Ellie left for the Conversion Tower, she put Mac in charge. It is unknown if Mac remained in charge after reuniting with Ellie. 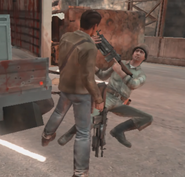