The M5A2 Folsom Carbine is the standard-issue rifle of the US Army Rangers. The Folsom is nicknamed "the paddle" for its wide wooden stock and ability to "spank" an enemy. The M5A2 uses the same .303 round as the British No. 6 Mk 6. Pressing L1 fires the underslung M203 40mm Grenade Launcher. The M200 uses high-explosive grenades which can significantly multiply the firepower available to an individual soldier. The Carbine is the player's starting weapon. 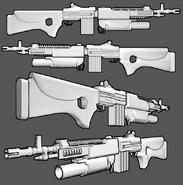 The M5A2 Folsom Carbine is the standard assault rifle issued by the U.S. military and Black Ops. Its magazine capacity is now reduced to 30 rounds and it only carries 2 grenades for the grenade launcher. It is effective at medium to longer range. It is first found in SRPA Station Igloo.

A Black Ops soldier holding a Carbine.
Add a photo to this gallery

The M5A2 Carbine is the eighth weapon found and can be picked up in the beginning of the chapter Nature of the Beast, where Joseph Capelli and Fyodor Malikov were inside the train on their way to New York City when they came under attack by a group of Wardens, led by a former member of SRPA, Mick Cutler. The first upgrade adds a bayonet to the rifle. The last upgrade allows the player to fire 3 grenades in a horizontal line at once in a spread formation.

It is reclaimed in the prison by killing a Warden wielding it and then picking it up from their corpse.

The M5A2 Carbine as it appears in the Resistance 3 reveal trailer.

The M5A2 Carbine in Resistance 3 multiplayer.

The M5A2 Folsom Carbine is a standard issue human weapon which is used by the Minutemen and the United States Armed Forces. It is the third weapon acquired in the level Staten Island after Tom Riley killed several Leapers in the sewers, found beside the dead soldier before he joins the Minutemen.

Oddly, in this game the second part of the standard M5A2 reloading sound effect (normally used for pulling the charging handle) is instead used for inserting the magazine.

It can fire the grenade by tapping or hold and move the target at the enemies with the touchscreen.

This may be a reference to the UFO crash at Roswell, New Mexico in 1947.

Resistance 3 and Others Edit

Retrieved from "https://resistance.fandom.com/wiki/M5A2_Folsom_Carbine?oldid=67952"
Community content is available under CC-BY-SA unless otherwise noted.