The M1911 is a single-action, semi-automatic, magazine-fed, and recoil-operated handgun which was the standard-issue side arm for the United States armed forces since its creation in 1911. While present in multiple games, it is never seen in use outside of cutscenes.

The M1911 makes several appearances (including cutscenes) in Resistance 2, with Sentinel Cpl. Joseph Capelli possessing one, although it is very rarely used by him, and in-game is always seen in his side holster. However, Capelli finally used his handgun in infamously executing Nathan Hale at pointblank at the very end of Resistance 2.

The M1911 makes several appearances only in cutscenes. James Grayson used a M1911 pistol to kill his infected brother, Johnny Grayson, and the Chrysalis.

The M1911 also appears in Resistance: Burning Skies. It is not a playable weapon but it appears in some cutscenes. During a cutscene, Richard Gorrell can be seen holding a M1911 in one of his hands.

Joseph Capelli with his M1911.

James Grayson about to kill the Chrysalis with his M1911. 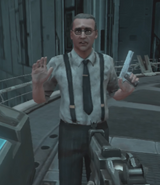