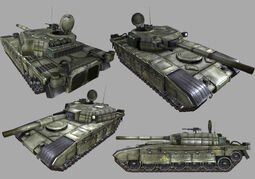 The M-12 Sabertooth Tank is an American built light battle tank. Its armament consists of a large 80 mm cannon, a heavy machine gun, and another lighter machine gun. Although an American tank, a small number of these were sold to Britain.

The player only gets two chances to drive a Sabertooth: in York - "A Lone Survivor", the player has the opportunity to drive the tank in order to reach the bus depot. Running over ten enemies with the tank grants the player the "Chimera Pate" Skill Point; and in London: Outskirts, "Ice and Iron", where the player has to reach the tank after fighting multiple enemies including a Stalker and a Titan. The M-12 Sabertooth is then used to clear a landing zone.

The Sabertooth can hold its own against most Chimeran strains though larger Chimera like Titans and Widowmakers prove more difficult to take down.

In the first level, SRPA Station Igloo, a division of Sabertooths can be seen battling (ineffectively) against Stalkers and the two Goliaths that are attacking Station Igloo, in which midway through the level one of the Sabertooths was destroyed by being stepped on by a Goliath. In Twin Falls, there are a couple of wrecked Sabertooths behind a road barricade near the diner that was destroyed during the Spire attack on the town.

There are several Sabertooths in New York City, covered in snow and are either destroyed or long abandoned from having participated in SRPA's botched attempt to destroy the New York Chimeran tower. The destroyed Sabertooths in Resistance 3 doesn't have a light machine gun next to the hatch.

M-12 Sabertooths after destroying a Stalker.

An abandoned Sabertooth tank in Resistance 2.