Longlegs are a strain of Chimera that bears a striking resemblance to the Hybrid, but supports genetically and mechanically enhanced elongated legs (hence its namesake) which allows it to leap at greater heights and distances. They use their ability to traverse complex environments and finding an ideal firing position to rain down gunfire from above. They are very similar in function to the Slipskull. Longlegs also have a cooling system that is able to flap like wings. The strain first appears in Resistance 3, and later in Resistance: Burning Skies.

Longlegs first appear in Haven - "Women and Children First", when they land on top of the water tower and jump into the nearby junkyard.

These Longlegs are armed with Deadeyes and are similar to Sniper Hybrids. Unlike the latter though, these Chimera do not cloak themselves. However, this makes them no less of a threat, as they can move quickly from sniper perches. Their quick movement allows them to attack with brutal efficiency from unexpected positions as well from long range.

Longlegs are the first Chimera the player encounters. They first appear in Staten Island, when one grabs and kills a fireman named Smitty.

Most of the strategies for Resistance 3 are still effective in Burning Skies (e.g. watch out for red lasers, utilising cover, etc.)

Longlegs being dropped from Dropships. 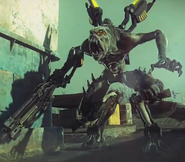 Capelli charging at a Longleg. 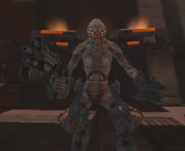 A Longleg, inside the power station.