"Command, what the hell is that?"
―Nathan Hale upon first seeing the Leviathan in Chicago.[src]

The Leviathan is a 300-foot tall Chimera. Only two Leviathans were ever reported. Described as the single-largest creature to have ever walked the earth, these bipedal creatures possess a large cooling device on their back, as well as skin that repelled all kinds of weaponry, with the exception of explosives.

The only Leviathan encountered in the game is in the Chicago mission.[1] It is assumed that thousands of bodies would have been necessary to create it. Prior to the Leviathan sighting in Chicago, Specter Team reported that the Chimera were constructing a 300-foot-tall enclosure surrounding Wrigley Field, possibly the birthplace of the creature.[1] SRPA had decided to ignore the report since Specter Team had just decimated the Chimera command structure in Chicago during Operation Shadow Strike.[1]

When Echo Team arrived to Chicago to deactivate the city's Chimeran Tower, the Leviathan's roar was heard when Nathan Hale assists Benjamin Warner in deactivating Hellfire Turrets after shutting down the first turret. It was then briefly seen in the distance by Hale on the subway bridge on State Street. Halfway after Hale and Victor Company helped in clearing Chimeran forces in the Michigan–Wacker District, the Leviathan made its full appearance before Hale fled into a nearby building.

Subsequently, the Leviathan made actual contact with Hale and the Black Ops forces in which it swat away a U/AV-17 Hawk, carrying Keystone Company, into a building where Hale was on, killing everyone on board the VTOL. Thereafter, the Leviathan picked up Hale and attempted to devour him, but is repulsed by the L210 LAARK's rockets that Hale had equipped. The creature then literally threw Hale across Chicago, in which he then landed into an outpost of the Chimeran Tower. SRPA forces attempted to kill the Leviathan while it was distracted by Warner. They planned to lure it under a sky-bridge where a demolition team laid explosive charges inside the sky-bridge to blow it up and inflict massive trauma to the Leviathan's head. Hale forced the Leviathan under the sky-bridge by using the LAARK, but the charges failed to detonate. This forces Hale to fire at the bridge when the Leviathan was under it, and the subsequent explosion blew off a portion of its face, exposing its skull. Hale fired one more rocket into its skull, thus eliminating the Leviathan.

The Leviathan is immune to any weapon and is only scripted to die at the end of Chicago. When the Leviathan picks up Hale, the player is automatically armed with the L210 LAARK (the only weapon that can deal damage to it) and must fire at its face and mouth when about to be eaten. This occurs twice before the player is thrown onto a building. The player must escape as the Leviathan will tear the building apart, and cross a fallen, makeshift bridge into another building before the Leviathan destroys the bridge. Thereafter the player again must run down from the roof of the building as the Leviathan will tear down the above floors before arriving into a reinforced room. There are more ammo for the LARRK in the center of the room.

A partially-completed Leviathan is encountered at the end of Resistance: Burning Skies in the Conversion Tower, a massive facility seemingly designed specifically to manufacture this strain. Richard Gorrell engineers the attack on the Union City Protection Camp in order to gain access to the incomplete Leviathan and rig up Gray Tech control modules to it, so that it will fall under his control and fight for the U.S. military.

The Leviathan was shown to be impartially complete, as it has no eyes and does not appear to have a cooling unit fitted. Gorrell, however, was unable to control the Leviathan, as it goes berserk and fought Tom Riley, who killed the beast.

Advertisement picture of the Leviathan on a building in South Korea. 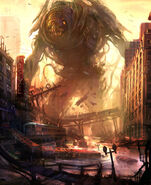 A close up on the Leviathan's face.

The Leviathan as it appears during the boss fight in Resistance: Burning Skies.