The L23 Fareye is an advanced sniper rifle developed by the British. It was later used by SRPA after 1951. The Fareye possess a special attachment designed to accelerate neural activity with tailored electromagnetic pulses. This frequently creates the perception among snipers that time has slowed.

Long
The L23 Fareye is obtained in Nottingham - "Conduits", after Nathan Hale battled against the Titan.

Press the aiming button to use the scope. Up and down on the D-pad adjust the magnification. With a good solid headshot, the Fareye can take down most Chimeran adversaries, and even the Steelhead will go down in one shot. The secondary fire triggers Focus Mode, allowing it's special attachment designed to 'slow' down time and allowing the player the time to accurately hit their opponents. 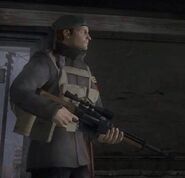 The L23 Fareye retains its original function in Fall of Man, but the secondary fire seems to be much more effective. Whereas before, the slowdown effect used to deplete relatively quickly. If used properly, an entire clip can be used while slowdown is used for every bullet.