"That's too big to be a fury."
―Aaron Hawthorne at SRPA III[src]

The Kraken is a Chimeran strain that first appears in Resistance 2. The Kraken is a large aquatic creature with four tentacles, each tipped with mechanical drills that can split into claws.

"Seal the shutters! Now! It's a Kraken!"
―Major Blake in San Fransisco base, moments before a Kraken breaches the security perimeter[src]

The Kraken is an aquatic beast, similar to that of a squid. It often roars, opening its "four-flapped" mouth before it tries to consume its prey. It also has extended tentacles with razor-like claws used to smash through to kill its enemy.

Steps to Defeat the Kraken[]

The Kraken is battled twice in two different locations and has different attacks at each location.

This time, the player needs to finish off the Kraken. The kraken will scream, giving the player damage to a fatal rate. This is the opportunity for the player to fire. Repeat this step until the Kraken gets different attacks. When it swims far from the pad and appears above, DON'T fire and wait for it to come closer. While it's swimming, move as far away from the edge (where the kraken is headed to) and as it grabs the pad and opens its mouth wide, fire. Repeat this step until the kraken is killed.

The Kraken appears in San Francisco, where it attacks SRPA III. One SRPA personnel refers to it as "a Kraken" which gives reason to believe that there are others. The Kraken acts to breach the base in an attempt to flood it. It encounters Nathan Hale before being driven away by a Pulse Cannon before finally confronting him during his escape from the base, in which he fought it from the water's surface on a VTOL landing pad. The Kraken attacked using its tentacles and rammed the platform Hale was on, attempting to swallow him, while it would also dive underwater to evade his attacks. Hale endured its attacks and killed it with a Pulse Cannon when it attempted to swallow him.

Joseph Capelli and Fyodor Malikov encountered a deceased Kraken in Wrightsburg, Missouri. Malikov theorized that the creature may have lost its way from deeper waters from swimming up the Mississippi River before dying from unknown circumstances, in which it had been left with a disemboweled midsection. It is possible that as it swam into shallow waters, it beached itself, which would then have made itself vulnerable to whatever creature(s) that had killed it, which was most likely a large group of Widowmakers. It can also be possible that Krakens are categorized as 'Feral Chimera', and the militarized Chimera have completely or almost eliminated the Kraken strain. 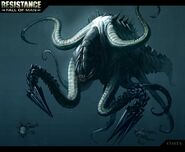