"Daddy!"
―Jack calling to his father.[src]

Jack Capelli is the son of Joseph Capelli and Susan Farley.

Born sometime in 1954 after his parents married, Jack grew up in the underground tunnels of Haven, Oklahoma. For most of his early life, Jack was raised by his mother, as his father was often away assisting the town, despite this, he grew fond of his father, and often longed to spend more time with him. Many residents often stated that the arrival of Jack had dramatically changed his father's previously aggressive attitude, as they noted that he was increasingly-driven to protect his family.

Despite his parents best efforts, Jack grew increasingly ill in 1957, largely due to the Chimeran terraforming process. Due to a lack of medication, Jack was unable to be treated for his fever, which worsened by August. During this time, Jack was unable to rest, and was only able to sleep after his father had spent the night to try and get him to rest.

On the 9th of August, his father had departed to investigate the disappearance of Tommy Dean. During his investigation, Joseph discovered the presence of a nearby terraformer, and quickly sought to evacuate the town. Carried by his mother, Jack met up with his father at an underground bank vault where he was informed over the cause of his illness by Joseph's former physician, Dr. Fyodor Malikov. Amongst the last few residents to leave the town, Jack witnessed as his father left to join other residents in buying the town time to evacuate.

With the evacuation finally completed and the terraformer dangerously nearby, Jack's mother implored his father to leave with Dr. Malikov to New York City in an attempt to give Jack a better life. Having awakened due to the chaos, Jack witnessed his father reluctantly departing and called out for him, throwing one of his mittens to him before he was carried away through the evacuation tunnels.

His father kept the mitten with him during his journey, in the hopes to reunite with his family again.

Alongside the rest of Haven, Jack and his mother evacuated to Baxter Springs, Oklahoma, where a doctor was finally able to provide Jack with some medicine, resolving his illness. During this time, Jack and his mother lived in a farmhouse, as they awaited his father's return.

Several weeks later, after his father destroyed the Chimeran tower in New York City, Jack was playing with a toy with his mother was nearby. Hearing the arrival of a VTOL, his mother quickly ran out to embrace his father as Jack followed close by. Reunited with his father, Jack happily embraced him as they watched the Remnants' VTOL depart. 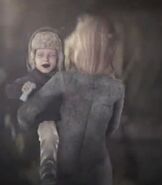 Jack being carried away by his mother Susan.

Jack, ill in bed, with his father, Joe, overlooking him.
Community content is available under CC-BY-SA unless otherwise noted.
Advertisement