Humanoid/reptilian body structure, and are taller than a human being

Hybrids are the basic foot soldiers of the Chimeran army, and are the most commonly encountered enemy throughout the Resistance series.

Created from infected human hosts via conversion centers, the Hybrid is the most common enemy seen in the battlefield. They are several inches taller than the average human being, are highly agile, and possess remarkable strength. They are distinguishable for having six eyes, large teeth, pale skin, and heighten metabolism.[1]

Hybrids are a savage enemy, but are also keen and tenacious. Hybrids are quick to learn the methods of their adversaries. They had already displayed expertise in British Army tactics by the time of Resistance: Fall of Man. Beyond their adaptive nature, Hybrids have been known for their sheer numbers that have overwhelmed humans on every battlefield. While easy to dispatch as individuals, Hybrids that gang together are almost unstoppable.

Secondary: Bullseye homing tag (Resistance 2 and 3(if secondary fire cheat is activated), bullseye traps only in 2 and homing tag only in 3)

Hybrids make up the bulk of the Chimeran military. All Hybrids use the Bullseye and carry Hedgehog Grenades. They are sometimes led by Steelheads. Despite their low rank, they have relatively high hitpoints for a standard enemy, taking multiple headshots from most weapons, and will use their durability to close on the player's position while under fire, often charging forward while firing from the hip. They can melee the player at very close range, doing substantial damage. When killing NPCs they will instead use pre-set kill animations.

As Hybrids age their bodies apparently grow increasingly large and spindly and their cooling units begin to wear out, eventually resulting in the decrepit Hybrid forms called Gray Jacks. This is the only game in which this happens. Hybrids are harder to defeat than in the other games, possibility due to the overwhelming abundance of weapons and ammo.

These Hybrids are the most commonly encountered. They have no head gear and little armor protection, and four rectangular cooling towers.

This type of Chimera is less common than the Type 1, though still encountered fairly frequently. They are more slender than regular Hybrids (appearing to be converted from women, though this would later be contradicted by Resistance: Retribution), and have dark mottled skin, four conical cooling towers, and a sensor device mounted on front of their head.

The rarest type, these Hybrids wear armor on their arms, legs and torso. They can be identified by four cylindrical cooling towers and their additional armor, and are usually only found around key locations important to the Chimera. They are exclusive to Resistance: Fall of Man.

Only the Type 1 and Advanced Hybrids appears in Resistance 2. They are less bulky than the version in Resistance: Fall of Man, and due to the switch to a more "crunchy" damage system in the sequel where enemies have low hitpoints, they are far easier to kill, going down with a single headshot. They compensate for this with improved AI and a far greater propensity for throwing Hedgehog Grenades. They also now have access to all of the functions of their Bullseye and will frequently fire tags; they will even use Bullseye Traps if the player is in cover and outside grenade range.

When maneuvering a combat situation, Advanced Hybrids show somewhat more self-awareness than their Type 1 counterparts, usually moving between cover objects at a crouching jog and hiding behind cover more effeciently rather than running at a full sprint and firing from the hip, respectively.

Hybrids reappear with a less mutated look, stronger despite wearing less armor, though still far less tough than in the first game and prone to instant-kill headshots.

Their heat stacks are now vulnerable to damage and if destroyed will cause the Hybrid to overheat and explode, much like Titans in the previous games; this explosion can damage other Chimera nearby. Hybrids will sometimes engage the player in a grapple, which the player has to escape by pressing L3. They are the most common enemy in the game. Like other enemies, their heads can be blown or tore off.

Sniper Hybrids are Hybrids armed with Deadeyes and can hide themselves with a cloaking ability while scanning the environment with laser sights. The Auger scope can find cloaked ones. Sniper Hybrids are fixed to their sniper perches and, despite their cloaking ability, can be identified by their laser sights, which can be exploited to achieve the amusingly named "Frickin' Laser Beams" trophy. They appear once in Mt Pleasant, and for the remainder of the game, they appear only in New York.

Wildfire Hybrids are the same as normal Hybrids except they have possess more muscles as they have to carry the heavy Wildfire rocket launcher. They will place themselves at a distance from their enemies so they can take them out easily with their Wildfires. They are only encountered in New York.

Hybrids are one of the most common enemies in the game, and are a combination of the Resistance: Fall of Man and Resistance 3 incarnations, having the toughness of the first game's Hybrids coupled with the exploding cooling stack of 3. They have a more human skin tone in Burning Skies than in other games, and have a mismatched cooling stack layout, with the standard Chimeran body with hose sockets on the chest but no hoses, but large conical heat stacks like the Type 2 Hybrid in Fall of Man. As ever, they are armed with the Bullseye; as with the first game, they will never use Bullseye tags.

Since Burning Skies has only limited location-based damage, aiming for any part of their body including the head deals the same amount of damage to them. Poor hit detection means that aiming for their heat stacks often instead deals damage to their body; heat stack explosions are more or less random unless using the Auger.

These resemble the Sniper Hybrid of Resistance 3 and are armed with the SixEye sniper rifle.

A pre-production version of the Hybrid. The head was later redesigned due to the modeller complaining that this head variant looked like a duck from certain angles. 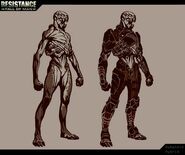 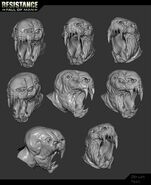 A group of Hybrids attacking.

A Hybrid in battle.

Concept art of a running Hybrid. 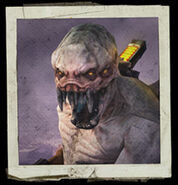 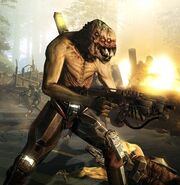 Two Hybrids in the sights of a Fareye.

A model of a bust meant for the collector's edition. 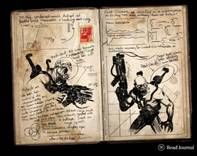 A Hybrid in action with a Shield Drone.

A Hybrid meleeing the player. 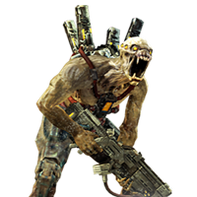