Howlers are a strain of large quadrupedal Chimera and exclusively appears in Resistance: Fall of Man.

Created during the Chimeran invasion of the United Kingdom, Howlers are a specific breed that were similar to those of quadrupedal animals such as lions and tigers. Utilized to wreak havoc on British lines, Howlers have additionally been known to emit a considerable ability to communicate through its rudimentary and primitive vocalizations. Aside from communications purposes, this howl has been known to have had a major psychological effect on British forces, largely as their calls have been heard from miles.

Largely due to their canine-like appearance, it can be presumed that they were created from ordinary animals that had been infected by the Chimeran virus or had been purposefully bred like the Widowmaker. Regardless, their conversion has had a major effect on their bodies with their skin having been enhanced to sustain multiple shots. British forces have learned that shotguns are effective in eliminating these creatures quickly, and have equipped patrols with Rossmore 236 combat shotguns in areas with known Howler presences.

The Howler's eyes are noticeably different from that of ordinary strains of the Chimeran virus. Their eyes are orange or red in color, rather than the bright yellow found in other strains. Also, the pupils are horizontal and figure-eight shaped, instead of the vertical slits present in Hybrids and other common strains.

First encountered in Manchester, the first Howler is seen guarding the entrance to the Cathedral, attacking Nathan Hale and the remaining British troops. The Howler is eventually eliminated as the squad enters the Cathedral. Shortly after an ambush by hoards of Leapers and Steelheads that kills off the British troops, another Howler attempts to ambush Hale before being quickly eliminated.

Howlers further sporadically appeared in Bristol and Somerset, where they are seen attacking Northern Command and Southern Command.

In The Gathering Storm Howlers appears in the Chimeran invasion of America in late 1951, also serving as scouting units much like regular military dogs. It is surprisingly revealed that a single known Howler named "Ralf" is able to be tamed by a woman named Spook in Chicago. It is explained by Captain Bo Richards that Spook found Ralf who was wounded and nursed it back to health, and in return it serves and protects Spook. Ralf also helps Nathan Hale by mauling a charging Steelhead. This signifies that it is possible for certain low status Chimera to rebel against higher ranking Chimeran strains such as Angels. Or that a certain part of the Chimeran brain registers the telepathic command, and this was damaged when Ralf was wounded and became feral.

A player looking at a dead Howler. 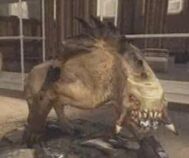