A Hellfire turret is a heavy automated, Chimeran anti-personnel turret.

The Hellfire turret was used as a replacement for the Chimeran Sentry Gun (possibly because of the fact that humans can use sentry guns against the Chimera). Instead of firing large slugs, it fires a continuous beam of energy that sets the targets on fire, and in rare cases completely vaporizes it. Although it deals massive damage to targets, force barriers are surprisingly unaffected and should be used if no cover is available. The only way to disable or neutralize a Hellfire turret is deactivating it from the rear or with air support.

A smaller, hand-held variation of the Hellfire turret, the Brute Minigun, is sometimes carried by Ravagers. These are much smaller and less powerful, but can still inflict high amount of damage.

Hellfire turrets only appears in Resistance 2. It resembles a large gray-and-black ball attached by toothed gears to a rotating sphere. The cannon is composed of three prongs that all rotate and fire the beam from the middle. On the back of the base, there is a control panel with a single green button which turns it off and on.

A beam from a Hellfire turret firing across the street to a car in Chicago. 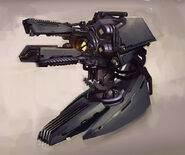