For an evolved version of this enemy, see Leech.

"Looks like they got the whole town. Keep your distance sir. There's no telling if one of them would hatch."
―Benjamin Warner[src]

Grims are a strain of Chimera that are created from humans through the Spinner strain. Although frail in form, Grims are fast moving and pose a serious threat when in groups.

The Grim strain are the latest byproduct of the Chimera's conversion process and are created by using Spinners, which capture human hosts and are weaved in cocoons. The cocoon slowly rebuilds the host as they are converted into a Grim. A Grim has the appearance of a nude, sinewy Hybrid, lacking a cooling unit, and their spines appear to bulge out.

It is not uncommon that the Grim strain are heavily populated in human cities due to the Chimera's strategy of deploying Spire missiles carrying Spinners into human dense metropolitan areas. It is by large numbers combined with their speed that compensates their frailty and incapability of using any kind of weapons that made Grims formidable threats.

When a human is converted into a Grim, their immune system collapses. This allows toxic bacteria to contaminate the Grim's blood, allowing explosive yellowish-green pus to form in it. This process takes place at an unknown period of time in the Grim's life stage, eventually turning into a Leech.

Grims first appears in Twin Falls. The Grim's main form of attack is to rush at the player and engage in melee; this attack can be very powerful when in large groups. An average group can have up to twenty Grims. Surprisingly, they are tenacious creatures and can survive even if one of their limbs have been cut off (by a saw blade from a V7 Splicer or Rossmore Shotgun). They will crawl towards the player to attack if they have lost a leg, or hit the player with a severed arm.

Grims appear to remain in a hibernation state in their cocoons, until any unwanted intruder enters their proximity. Also, Grims seem to remain in an indefinite length of time in gestation, as that in Chicago a large Grim population remains in the city, even two years after it is conquered by the Chimera, there are still cocoons located around.

Grims are first encountered in Wrightsburg. They are among the Chimeran strains that are considered "feral". In appearances, the Grim have a red gash running from their neck to the middle of their chest and a less human-like skull than in Resistance 2, and are now larger, averaging eight feet tall; "child" Grims are no longer present, and even small Grim cocoons will hatch full-sized Grims. The strain shows some evidence of intelligence, throwing rocks or small debris at their enemy at unreachable distances rather than blindly charging. They are also capable of swimming.

Intel describes a Grim as a "half-baked hybrid," stating that Grims are hatched before they are fully converted.[1] It has never been made clear how a Spinner cocoon produces its host into a Hybrid, but according to the intel, Grims are actually an undesirable byproduct of the process rather than its goal. It is believed by some people that when Grims reach the end of their life span, they become Leeches.

These special Fire Grims exclusively appear in the Brutality Pack and has the ability to set the player on fire and also capable to throw "fire bolts".

Grims are seen fairly routinely in Burning Skies. As in other games they hatch from pods and attack in large groups, and are vulnerable to anything but slow-firing weapons. The Grims in the game have pale skin with red highlights, and a shiny look to their bodies as if coated in slime. Unlike Resistance 2 and Resistance 3, Grims are created by the Crawlers. Infected scientists can sometimes be seen amongst attacking groups of Grims, they still wear labcoats and will attack the player. They appear to be stronger and faster than normal Grims.

A Grim as it appears in the Resistance Comics. 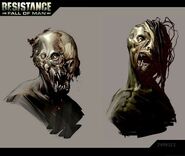 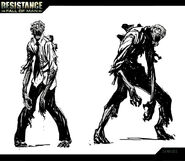 A Black Ops soldier and several Grims as shown in Insomniac's tech demo.

A dead Grim with clothes that can be found in the game.

A Grim being killed by the Marksman's secondary fire.

A Grim as it appears in the Resistance 3 reveal trailer.

A Grim jumping at Joseph Capelli.

A group of grims 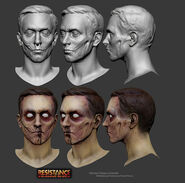 Concept art of the infected scientist.