Gray Tech (rendered as Grey Tech in Resistance: Burning Skies) is the term that SRPA researchers have given to advanced, technological objects that have been recovered from Chimeran towers. Gray Tech is a material created by a yet unknown species, whom were believed to have driven the Chimera from Earth long before humanity's existence. The nature of the technology is not fully explained but desired by both humans and Chimera for its capabilities of creating or augmenting powerful weaponry.

In March 1952, a SRPA research team led by Dr. Fyodor Malikov in Station Genesis in Bryce Canyon, Utah discovered ancient components from Bryce Canyon's Chimeran tower, which Malikov's research team dubbed as "Gray Tech." Intensive study on the Gray Tech components was conducted under Project Prometheus, which reveal that the components were far more advanced than the technology the Chimera had in their possession and speculated that these artifacts belong to another unknown alien race millions of years ago.[1] Specter Team was created for the purpose of finding the Gray Tech components before the Chimera.[2][3] Furthermore, the Cloven were also keenly interested in the components and had been amassing the technology far more than the Chimera and humans had in their possession; however, the Cloven seem to have no serious intentions for the components and instead used them as religious objects for their bizarre culture.[4]

The abilities and capabilities that the objects have shown is far in excess of anything seen from the Chimera. Examples of this includes:

It is unknown what will happen when the objects are fully combined. According to Project Prometheus researchers, the combined effect of only a hundred of such Gray Tech components would have the ability to produce energy equivalent to over twenty-three billion kilotons of TNT.[9] The weapon that these pieces would combine to form was dubbed by SRPA scientist Julia Cathcart as the "Prometheus Weapon."[10]

Daedalus was close on constructing the so-called Prometheus Weapon in Holar, Iceland with the large amount of Gray Tech components that the Chimera had acquired, and was stopped by Specter Team.[11]

In online co-op mode, Gray Tech can be used to purchase new weapons and accessories at different levels. It is acquired by killing Elite Chimeran units and are also found in certain areas in a mission. In Superhuman difficulty, players receive double Gray Tech components than in Normal difficulty.

During Infected Mode in Resistance: Retribution the player can reach areas where Gray Tech and Infected Intels are. Though Infected Mode is non-canon, an Intel in Resistance 2 reveals that James Grayson and the Maquis have found gray tech across Europe for SRPA.[12]

In Burning Skies Grey Tech items are cyan-coloured cubes made of interlocking segments, which are used to upgrade weapons. Each weapon has six upgrades, subdivided into two lists of three coloured red and blue; one red and one blue upgrade can be equipped at any given time.

Grey Tech is first encountered when Tom Riley and the Minutemen find a Army truck carrying a crate with three Grey Tech items. The Grey Tech were being sent to Richard Gorrell, who plans to use the items to create control modules that can be implanted into Chimeran creatures and used to enable their control by humans, with the ultimate goal of capturing a Leviathan and pressing it into service against the Chimera.

Ultimately, Riley destroys all the Grey Tech components found throughout the game by throwing it into the wreckage of the Conversion Tower, stating that it cannot be allowed to fall into the wrong hands. 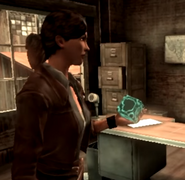 Grey Tech inside a SRPA briefcase.