Gray Jacks are decrepit Hybrids that have almost outgrown their bodies. They are not an individual strain of Chimera, since they are simply elderly Hybrids. They exclusively appears in Resistance: Fall of Man.

Initially created as Hybrids, many of them were created with the expectation that they would not survive for a long period of time. However, as human forces were overrun with relative ease, millions of Hybrids were still active after the fall of the United Kingdom and their increased metabolism forced their bodies to grow as they aged. This resulted in elongated limbs and as a result, their cooling units were placed under increasing strain as it was not designed to handle the bodies at this size. As such, with their cooling units unable to handle the accelerated metabolism, the "elderly" Hybrids bodies began cooking themselves inside out, with Gray Jacks being the final product of this process. Near-death, this results in a necrotic appearance and the perpetual, characteristic odor of decaying flesh.[1]

Despite these Chimera being unarmed and their frail appearance, under no circumstances should they be underestimated. They possess a long reach and wicked claws, giving them a devastating close-range attack. The British Intelligence Corps, in conjunction with the Army Medical Corps have released a memo stating that those wounded by a strike from a Gray Jack suffer injuries that are extremely difficult to sterilize and highly prone to infection, resulting in a high mortality rate. Due to their already extremely rare nature, Gray Jacks are amongst the few Chimeran forces to not have been formally inducted into its military units. Many are instead relegated to patrolling Chimeran bases, or at times, suicide units deployed as part of Chimeran assaults on human military bases, as seen in Northern Command.

With the destruction of all Chimeran forces in the United Kingdom, British forces have noted that the Gray Jacks have not been seen amongst the European front, suggesting that most "elderly" Hybrids were deployed in the United Kingdom and have already aged and died out. By the events of Operation Overstrike, former British Marine James Grayson notes that most conversion facilities that he had destroyed were on the verge of collapse, with variants such as Menials and Gray Jacks having all but disappeared.[2] It can be presume that the Gray Jacks are rendered disused from Daedalus's overhaul of the Chimeran army.

With most Hybrids deployed to the United Kingdom having presumably served during the invasion of mainland Europe in late 1949, this has led to a number of them aging rapidly. With the increased metabolism, these Hybrids begin sporting elongated limbs, and suffer necrotic flesh due to their bodies cooking themselves inside out. Unfortunately, the Chimera have been unable to reverse or at least halt the process, as a result, these Hybrids begin "evolving" into Gray Jacks. Sometime during the occupation, members of the British Intelligence Corps were able to recover a number of these creatures, and sent them to Northern Command for further evaluation. Quarantined in specimen tanks, these creatures were examined, which allowed for both the Intelligence Corps and Army Medical Corps to determine the nature of this unusual creature and provide intelligence to British forces, however because of the rarity of such units, British forces tended not to encounter them.

During the Chimeran infiltration of Northern Command, the Gray Jacks trapped in their specimen tanks were released when Chimeran forces hijacked the facility's command center, allowing nearly all Chimeran specimens to escape from their cells and wreaking havoc across the base. Sgt. Nathan Hale first encounters a Gray Jack attacking a lone British soldier in the Gray Jack's containment room. Escaping their cells individually, the creatures attempt to kill Hale and the soldier, but are quickly eliminated.

Next seen in Cheddar Gorge, at least three Gray Jacks are part of the Chimeran defenses that Hale encounters during his investigation of the recently excavated Chimeran tower.

Once again, Hale encounters several Gray Jack groups during his exploration of the Chimeran-infested tunnels of Bracknell and working with Leapers, Gray Jacks often ambush Hale.

Last seen in the alleyways of London, at least one Gray Jack is seen after killing X-Ray Four and Six and attempts to ambush Hale as he heads for the rooftops. 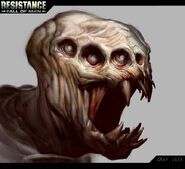 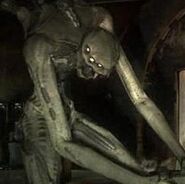 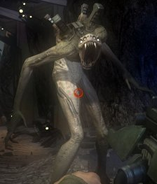