Graterford Prison is a prison located in Skippack, Pennsylvania, a suburb of Philadelphia. After the Chimeran invasion, the prison has been abandoned and subsequently taken over by its former prisoners, known as the Wardens, led by Mick Cutler.

With Mick at the helm, he would later turn the institution into his haven, rounding up several passers-by and civilians and then deporting them to the institution to either serve as their slaves or forced to fight in a gladiator-esque competition held within the central hub of the prison. Those who had died would either be thrown into the Pit - which was inhabited by several Feral Chimera, or their bodies brutally hung using meat hooks as a decoration. To avoid the Chimera from attacking the institution Mick, with the aid of Herbert Sawicki, had several captured Drones modified to send out an "all-clear" signal to the Chimeran forces, thereby keeping them away from the prison.

After the imprisonment of Joseph Capelli, Herbert Sawicki would later work with the former Sentinel to take down Mick and the Wardens by taking down the modified Drones' beacon, which will lead the Chimera into the facility. Taking down three of the Drones, Joseph would later be forced to go down to the Pits after falling for a trap set by Mick. After fighting through Feral Chimeras, Joseph was able to resurface outside of the prison. By then, Chimeran forces have already begun an attack on the facility.

Fighting through both Wardens and Chimera, Joseph was able to return to the facility. Meeting with Herbert, who freed several of the hostages held by the Wardens, Joseph was then tasked to destroy the last Drone and kill Mick to stop him from causing any more trouble.

Returning to the central hub, Joseph attempts to deactivate the Drone, but was later ambushed by Mick. Thrown down to the arena, Mick would viciously attack Joseph with his fists. Fighting back, Joseph was able to fend him off, and as Mick drew his Magnum, Joseph redirects the shot to Mick. With a bullet embedded in his head, Joseph utilizes the secondary fire to finally finish off Mick.

With the Chimera and the Wardens locked in combat, Herbert, Joseph, and the rest of the Warden's former prisoners, escape the institution which then fell to the Chimera.

It is likely that after the Terraformer in New York City was destroyed, survivors captured the place back from the Chimera.

The prison had several cells and blocks formerly used to keep convicted criminals. After the Wardens took over, the cells were used to keep their own hostages. Several control rooms were also found within cell blocks, used to keep the doors locked and the whole facility in check. The prison's cafeteria was extensively used as the Warden's place of gathering and eating.

The facility also had a central hub, where a makeshift arena can be found. "Competitions" held by Mick would be done for the Warden's entertainment, sending several of their prisoners to fight off Feral Grims and Leeches; if they survived long enough they would soon have to fight off the Wardens themselves.

The institution's sewage system, nicknamed the "Pit", was also used as a nest for several of the Feral Chimera. Pods for both Grims and Leapers can be found in the Pit. It is also most likely where the Wardens harvest the Grims used in the arena. 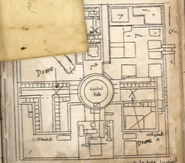 A map of the prison as seen on a Journal.

Graterford Prison being attacked by Chimera.