A Goliath is a massive walking siege battery employed by the Chimera to assault fortified military establishments or civilian positions. Each Goliath is approximately 150 feet tall, though their height has doubled to 305 feet in Resistance 3.

Goliaths are primarily armed with concussion mortar batteries that soften up enemy opposition. Entire companies have broken under the mortar barrages of the Goliath, the human soldiers simply fleeing for their lives. Ironically, this only exposes them to the Goliath's most fearsome weapon, Spire missiles, which deliver Crawlers and Spinners that can infect thousands.[1]

As of 1957, Goliaths no longer carry Spire missiles due to the Chimera's new objective of annihilating humans instead of capturing them for conversion.

Goliaths are mentioned several times during the course of Resistance: Fall of Man, and can be assumed to have been present as early as York, since a barrage of Spires are fired at the bus depot at the end of "Spires." However, they are not physically seen until Cheddar Gorge, wherein a number of partly-built Goliath chassis and limbs can be seen strewn around the facilities clustered near the excavated Chimeran tower. The threat of Goliaths is also the reason for the evacuation of Southern Command.

Fully assembled and active Goliaths are absent until London, when a group of them are attempting to cross Southwark Bridge to encircle the British forces attacking the London Tower, but due to Nathan Hale's actions, all but one are destroyed by demolition charges placed on the bridge by engineers who were infected by Crawlers before they could detonate them. The single remaining Goliath is engaged by Hale and Stephen Cartwright in a captured Stalker, with the latter two eventually destroying the former.

The Goliath appears in London - "Giant Slayer" and serves as a boss battle against the player while commandeering a Stalker. The Goliath will strafe, albeit more slowly, and is armed with a total of three weapons: it can launch a volley of missiles, fire a single large missile, or launch a slow-moving mortar in the player's direction.

At least three Goliaths attack the SRPA Station Igloo of Iceland; one of the Goliaths is seen continuously throughout the level and serves as the level's boss.

In order to destroy the Goliath, the player must target and destroy only three (possible to hit 2 exhaust ports with 1 rocket) of the rear exhaust ports on its back throughout the level, meaning that the Goliath will take the entire level in order to be destroyed. Once the player destroys one exhaust port, the Goliath usually turns directly toward the player and attacks, so as soon as the player lands a hit, they must quickly follow Major Blake to a safer position.

A Goliath made a cameo appearance in the starting level of The Guns of Rotterdam where James Grayson and the First Squadron lands in Rotterdam. It can be seen shooting down a VTOL in the background.

By the events of Resistance 3, Goliaths have been upgraded and redesigned to be more effective at combating human resistance cells, in which their size has doubled to 305 feet tall and are armed with heat-seeking rocket launchers. The Goliath seems to have become nigh-invincible against human attacks, as their once vulnerable exhaust ports are now protected by metal armor plating and no character ever implies they can be successfully attacked otherwise. In the Goliath enemy journal, the survival tip is to simply "Avoid at all costs."

A group of Goliaths participated in the attack on Haven, which Joseph Capelli and Tommy Dean narrowly avoided under the 'feet' of one of the massive machines as they advanced.

In Wrightsburg, Goliaths patrol the flooded area of the Mississippi River, accompanied with Dropships and Shock Drones. Capelli and Dr. Malikov attempted to avoid these patrols during their journey to St. Louis by boat. Unfortunately, several Goliaths detected them and destroyed their vessel.

In New York City, Joseph Capelli's attempt to gain access to the New York tower was thwarted as a group of Goliaths advanced on him, raining down concussion mortar rounds on Central Park and ultimately forcing him to be saved by Charlie Tent and retreat on the Remnants' VTOL. 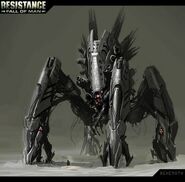 Rear view of a Goliath.

A photo of a Goliath.

The Goliath's cameo appearance in Rotterdam. 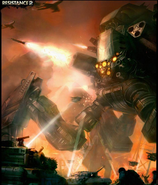 A Goliath firing at aircraft.

Joseph face to face with a Goliath in New York City.

Upper view of a Goliath.

A Goliath in Haven.

A Goliath attacking the boat.

The boat with a Goliath in the background.

A clearer picture of both the Goliath and the boat.