Colonel George "Bill" Amherst was a U.S. commander operating in Bayonne, New Jersey and orchestrating the defense against the Chimera and their invasion in New York and the surrounding regions.

Amherst was a close friend of John Martinez, who died in Operation Deliverance, and by extension to his daughter Ellie, and thus having a friendlier alliance with the Minutemen. He was associated with Richard Gorrell, the head SRPA director on Ellis Island, and maintained a strained relationship between them based on the unethical research conducted by Gorrell.

Amherst was introduced to Tom Riley by Ellie and helped in providing information on the whereabouts of Riley's family. He was then brought to the attention of the Gray Tech components recovered by Ellie. Amherst was already familiar with the technology as they were used by Gorrell in his experiments and blatantly disregard them.

Soon afterwards, the base came under attack by the Chimera in which Amherst directed military personnel, and Ellie and Riley among them, in defending the base. Following the attack, Amherst granted Riley and Ellie VTOL transport to Union City. 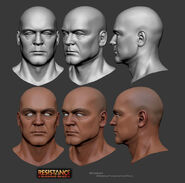 George Amherst in his office.