The Executioner is a huge, bulky Chimeran strain that only appears in Resistance: Burning Skies.

The Executioners were a result of Project Phoenix testing. A rogue scientist named Richard Gorrell created them in an effort to turn the tide of the Chimeran War. It appears that the tests failed as several hostile Executioners roamed free in New York in 1951.

Executioners are bloated and enormous, with their head almost completely enveloped by their massive shoulders. They wear no armour, their bulky bodies apparently do the job of physical armour. They are slow and lumbering, unable to do much more than walking towards the player's position.

Their main feature is a massive, over-sized right arm mounting a giant cannon, which is both the creature's weapon and its weak point. Two glowing fins stick up near the muzzle of their weapon and needs to be destroyed, then the weapon itself can be targeted; like a Titan, an Executioner explodes into a pile of bloody gibs upon death.

The first appearance of an Executioner in Staten Island. 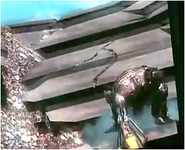 The Executioner lands on the ground after jumping off a ledge. 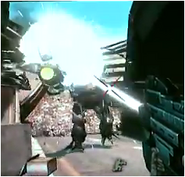