Ellie Martinez is the leader of the Minutemen and a supporting character in Resistance: Burning Skies.

Ellie is the daughter of an American soldier, John Martinez, who fought and died in England during Operation Morning Star. She carried on her father's legacy in leading a group of American resistance fighters, known as the Minutemen, to fight the Chimera.

When the Chimera began their invasion in New York, Ellie and the Minutemen tried to hold off the invaders in Staten Island and allowing people to evacuate. Fireman Tom Riley subsequently joined Ellie in assisting her to protect the people, including Riley's family, as they defend the evacuation zone. During the battle, Ellie and Riley discovered a cache of Grey Tech components that was being escorted by the U.S. military and realized that these alien technology can be used to upgrade their weapons. Thereafter, Ellie, Tom, and several Minutemen escaped from a Spire attack.

Ellie traveled with Tom to a naval base in Bayonne and meeting with Colonel Bill Amherst, who was a close friend of Ellie's father. She show Amherst the Grey Tech components she discovered. However, Amherst was wary of the components, especially those that were commissioned by SRPA scientist Richard Gorrell, a man that he despised. Their discussion is immediately cut short as the facility is then attacked by the Chimera. Ellie and Riley assist US Army personnel in defending the base. During the attack, Ellie manned an anti-aircraft gun and shot down a Chimeran Dropship, which nearly crashed into her. Ellie and Riley worked together by installing a main battery gun to the U.S.S. Puerto Rico and using it to kill the Abomination.

After defending the base, Ellie and Riley were tasked by Amherest to investigate SRPA Station Kali on Ellis Island. While en-route by VTOL, they pass over the George Washington Bridge where Chimeran reinforcements were crossing the bridge. Ellie calls for an airstrike, but Riley drops onto the bridge to rescue a crashed VTOL's crew, and forcing Ellie to rescue Riley. After rescuing the VTOL crew, Ellie and Riley quickly escape before F-86 Sabres dropped their payloads on the bridge.

She and Riley soon reach Ellis Island by boat and infiltrated the facility which had already been abandoned and completely overrun by the Chimera. They fought their way through the facility and proceed to Gorrell's office, where they learned about Gorrell's Project Phoenix, and his scheme to kidnap several humans and turned them into Chimera.

They then travel to Union City, in hopes of rescuing Tom's family. However, the Chimera have attacked the protection camp and abducting the refugees, including Tom's family. Ellie puts Mac in charge of the Minutemen as she and Tom board a Carrier to follow Tom's family to the Conversion Tower. Ellie becomes separated from Tom and searched for Gorrell by herself. She came across and rescued Riley's daughter Rachel and several other survivors. After reuniting with Tom, Ellie is convinced by Riley to evacuate the survivors while he dealt with Gorrell.

After Tom destroyed the tower and killed Gorrell, Ellie is warned by Riley about how desperate the American government is going to such extreme lengths to defeating the Chimera. Ellie cut her ties with Colonel Amherst before parting ways with Tom. 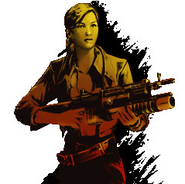 A portrait of Ellie, as seen in Burning Skies's single player menu.