Echo Team was a Sentinel unit of the SRPA and appears in Resistance 2.

Echo Team started off doing incredibly well prior to the Chimeran invasion of the United States on May 15, 1953, and completing operations such as Operation Iron Hand. But on December 21, 1952 Echo's team leader Lt. Hank Leavitt was killed by a Stalker in North Carolina, in which Nathan Hale succeeded him.[1] Echo Team later bared the brunt of the Chimeran invasion of 1953 when the Chimera attacked SRPA 3 in San Francisco. After escaping San Francisco, Echo were then tasked with destroying a damaged Chimeran battleship in the town of Orick. While boarding the vessel, Echo discovered that the Chimeran fleet intended to breach the Liberty Defense Perimeter through Twin Falls, Idaho. Following the destruction of the warship, Echo later traveled to Twin Fall and activated the town's two defense towers resulting in the destruction of three other Chimeran warships and defeating a Mother spinner, which almost killed Joseph Capelli. However, Echo was too late in preventing several Chimeran ships including Daedalus' flagship from breaching the the Defense Perimeter and subsequently activating a Chimeran Tower in Bryce Canyon.

Echo Team extracted Dr. Fyodor Malikov from Station Genesis and tried to stop Daedalus from activating the next tower in Chicago, but only to discovered that the tower was being remotely activated by Daedalus in Iceland. Echo traveled to Holar, Iceland in an attempt to assassinate the Chimeran creature. But the operation failed in which team members Benjamin Warner and Aaron Hawthorne were killed by Daedalus and with Hale being mortally wounded but saved in time by Joseph Capelli.

On June 26, the remnants of Echo Team along with Major Richard Blake and X-Ray Squad participated in Operation Black Eden; in which they managed to set a fission bomb onto Daedalus' flagship and destroyed the entire Chimeran fleet over the Gulf of Mexico. Nathan Hale and Joseph Capelli were the only participants to survive the entire operation. Tragically, however, Hale succumbed to the Chimeran virus and was executed by Capelli.

Following the operation, Capelli was dishonorably discharged from SRPA for killing Hale, thus putting an end to Echo Team. 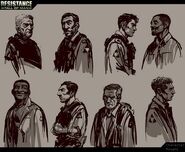 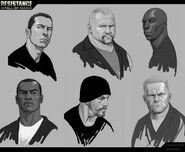