The Cryogun is a Chimeran weapon that appears in Resistance 3. A rare weapon, the Cryogun uses liquid nitrogen to freeze enemies and forcing them to a standstill.

It is found in the Chapter "Savior" where Capelli picks one before helping Jonathan Rose. The Cryogun's primary fire shoots a stream of coolant which arcs with distance. Enemies hit will gradually slow down and eventually freeze, with the amount of fire needed to freeze an enemy directly linked to its health. Frozen enemies remain totally immobile for several seconds, during which time most attacks (excluding further Cryogun primary fire) will shatter the enemy and kill it instantly; this includes melee attacks. Being a continuous fire weapon, it is useful against swarms of enemies, particularly Grims and Leeches, and even tougher enemies such as Ravagers.

The secondary fire fires a medium-range shockwave with an arc of about 45 degrees in a straight line which ignores most obstructions and will knock down weak enemies, though it deals little or no damage. The main function of this attack is to shatter frozen enemies, though it can be used alone to deal with high-pressure situations. When fully upgraded with the Freeze Wave ability, this attack will deal a fixed amount of freezing damage to anything hit; this effectively turns the Cryogun into a weak shotgun with infinite ammo. Freeze Wave takes two hits to freeze a Grim and a third to shatter it. This can be useful in a narrow space as frozen Grims will block those behind them, while the Freeze Wave will pass right through the frozen Grims to hit those behind.

It is reclaimed by picking one up from The Pit in the prison.

In multiplayer, the Cryogun has a very fast recharge time for its secondary; taking a second compared to the campaign's three to four second recharge. The Cryogun can be useful in a steady stream or rapid bursting. 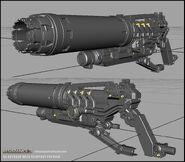