The Cloven are an enigmatic faction of human/Chimera hybrids who were formerly soldiers of the Imperial Russian Army that were inoculated with an experimental vaccine to the Chimera virus derived from Pure Chimeran DNA by Dr. Fyodor Malikov.

The Cloven are first mentioned in Resistance: Fall of Man, and first physically appear in Resistance: Retribution. There are conflicting reports of their nature, as they are hostile to both humans and Chimera, and have been seen to act very savagely, yet possess advanced technology (although this technology is believed to have been created by a different species and the Cloven are simply using it).

Beginning in 1927, the Chimera began their attack on Russia. From the very beginning Russia's military was inefficient in combating the alien threat, as thousands of human soldiers fell victim to the Chimeran virus and converted into Chimera. Russian scientist Dr. Fyodor Malikov worked on using Pure Chimeran DNA that he had discovered from the site of the Tunguska Event and created an experimental vaccine which showed promise of resisting to the virus. The Russian government, desperate to stem the Chimeran tide, ordered almost all surviving soldiers to be inoculated with Dr. Malikov's vaccine.

The vaccination initially worked, as the soldiers demonstrated a strong immunity to the Chimeran virus and were more effective in fighting the Chimera. However, some soldiers began to exhibit erratic and violent behavior. Gradually by September 1930, nearly 90% of the soldiers exhibited advanced mutations and severe insanity, with the majority deserting before banding together into small groups, roaming the Russian countryside preying on other humans. Becoming as much of a threat as the Chimera, these mutated and insane soldiers became known to European intelligence, and began referring to themselves as the "Cloven".[1]

Though the Cloven did not physically change into Chimera, the psychological stresses of their Chimeran condition drove the Cloven insane. The Cloven were able to hold on to their individuality to an extent, and as a result have traits of both Chimera (feral manners and cannibalism) and humans (speaking in their Russian dialect).[2][3][4] However, the Cloven have no known alliance with either group, and are hostile to both.[5]

On the day of their transformation and madness, known to them as the "Angry Night", the Cloven escaped westward. Upon reaching western Russia, the Cloven took over Moscow.[6] Their activities in the capital city were reported by survivors who fled to Europe, stating that they killed, cannibalized, and kidnapped ordinary people. For reasons unknown the Cloven only abducted women; these abductions are somehow connected to the "Leben Geist".[6] After the Red Curtain was breached by the Chimera, the Cloven migrated to Europe and settled discretely in many secluded locations, such as Paris' underground catacombs or abandoned towns.[7] The Cloven would later reach Britain by either hitching on refugee ships that were fleeing to Britain or following the underground tunnels which the Chimera had dug underneath the English Channel during their invasion of Britain.[8]

By 1951 the Cloven were beginning to be frequently noticed by the public due to their barbarous acts which included cannibalism and gruesome remains they left in their wake. This caught the attention of various human government organizations which attempted to make contact with the Cloven; however this invariably ended in violence. Throughout the entirety of the Chimeran War, the Cloven were rarely seen engaging in any conflict. However, it appeared otherwise as a detachment of Cloven fought against the Chimera and were witnessed by British soldiers near Lancaster. These Clovens actually lured the Chimera they fought to York where they deliberately coordinated a conflict between the Chimera and American forces during Operation Deliverance, allowing the operation to end in failure.[9]

By the later half of 1952, the Cloven were growing more aggressive in directly attacking the Chimera and plundering Chimeran weapons and technologies, with a particular interest in Gray Tech artifacts.[10] As of January 10, 1953, Colonel Rachel Parker informed Major Richard Blake that the Cloven are increasingly cooperating with the Chimera.[11] The Cloven's intentions still remain currently unknown; however, the last parts of the Cloven's human nature are probably beginning to vanish and soon they will be just another part in the Chimera's evolution.

Cloven physically resemble a normal human, but some move and act like animals, crawling on all-fours and using growls and roars to communicate. Their common appearances are having pale skin, bald heads, and worn-out gray uniforms in varying states of repair, from mostly intact as seen in Resistance: Fall of Man to indeterminate rags in Resistance 2 and Retribution.

In Resistance: Fall of Man multiplayer, the Cloven are equipped with helmets with the Russian letter Д (D), and sometimes they are seen wearing a bandanna to cover their faces and the color of their eyes.

Cloven possess a very ritualistic society, completely based on the death of their foes and themselves. The Cloven decorate themselves in the blood of their victims and use the bones of their foes in gory rituals, but not the bodies of their own fallen - Cloven strip the flesh of their fallen comrades for feasting and store the bones away. It is unknown if the Cloven bury their dead or not.[12]

In spite of their insanity the Cloven still cling to some remnants of their previous human lives. Evidence supporting this are their attachment to listening to music from old phonographs, collecting Russian paintings or artwork, and keeping broken figurines and photographs that are found on makeshift altars and shrines.[13][3][14] The Cloven have a preference for an an old Russian folk song, "Down the River Mother Volga", which is played on old gramophones near their shrines. It is unclear why the Cloven play this song.[15]

The Cloven have a hive mentality, working in small packs. If members of these hives are killed, the whole pack becomes less effective and the Cloven descend deeper into insanity, eventually becoming savage, brutal, animal-like fighters.[16]

Several Cloven-made symbols can be seen throughout the campaign levels and on concept art for Resistance: Retribution. The most common one is a circle with three stripes. Sometimes the Cloven mark areas with red crosses or handprints. A hammer and sickle can also be seen on concept art images and in-game. The purpose of these symbols is unknown, although it could be used to mark their own territory. It should be noted that the Cloven mainly use blood to create the markings.

Both the Maquis and the British intelligence groups believe that the Cloven are undergoing some type of evolution - as are the Chimera, presumably as a side effect of Daedalus's new evolutionary changes.[17] An example of this evolution was believed to be the Leben Geists (Living Spirit), named by German Maquis.[18][6] However, a diary entry recovered by James Grayson contradicts this theory, as the Cloven individual writing it (presumably before he lost all coherence) mentions the Leben Geist as pre-dating them.[2] Its possible that the Cloven are starting to evolve into something similar to the Chimera, but this is unknown.

The Cloven possess technology that far surpasses anything so far seen from either the Chimera or humans. A demonstration of this was seen when a single entity believed to be aligned with the Cloven, called a Leben Geist by the Maquis, took down a Goliath within seconds and after being hit multiple times.[19] In another development, a female Cloven being held at a British laboratory escaped when, according to the surviving guards, she turned invisible (similar to the Chameleons' cloaking devices). The guards also reported that she was able to withstand over 40-50 bullets before escaping.[20] There have also been accounts in which large Chimeran bases, sometimes occupied by over 400 Chimera personnel, have been destroyed in a single day. In these accounts, the wounds on the dead Chimera appeared to have been inflicted by small, short knives, and torn apart with bare hands.[21][22][23] It is believed that the Cloven are reverse-engineering already existing Chimeran weaponry and modifying it into their new and far more advanced weapons.[24]

A British soldier guesses that the Cloven can probably turn into Slipskulls (a type of Chimera), although due to how the conversion process works (the strain is determined by the number of humans used), it is likely that they are used to create a wide variety of Chimeran strains. Cloven are cannibalistic - much like the Chimera - eating their dead so that Crawlers do not infect them.[25] One Intel document describes Cloven who are captured by the Chimera will bite their own veins to kill themselves, rather than be infected. This implies that the Cloven may be able to be infected further with the Chimeran virus. When the Cloven are found dead, they have been found with a picture of their creator in their mouths.[26][27] It has been revealed through the Intel of Resistance: Retribution that their creator was none other than Dr. Fyodor Malikov.[1]

A group of Cloven who attacked (and practically destroyed) a Chimeran base in England are also said to have killed four Titan Overseers, ripped their hearts out, and used their blood to write "The Angels sleep" in Russian.[21]

Why the Cloven became so hostile to both humans and Chimera is unknown, but it is presumed that Dr. Malikov was unable to keep the Cloven under control and the Cloven became rebellious, creating their own faction and attacking Chimera and humans.

In a report, Colonel Rachel Parker of the British intelligence ordered troops not to engage any Cloven in the field unless they pose a threat.[17]

In Resistance: Fall of Man the Cloven are never seen in-game, but are mentioned several times in the Intel documents. However, they do appear as an unlockable multiplayer skin when the player registers on myresistance.net and uses the unlock code.

In Resistance 2 they are mentioned in one Intel document from the main campaign: a letter from Rachel Parker mentions that the Cloven are cooperating with the Chimera and that British Intelligence is sending two captured Cloven to SRPA for study.[11] The Cloven are passably mentioned by Dr. Malikov while being rescued by Nathan Hale in Station Genesis, in which Malikov considers his experience with the Cloven a "long story". Furthermore, several cooperative Intel documents that are unlocked reveal more about the Cloven and their capabilities. The Cloven multiplayer skin appears again in multiplayer via from the downloadable Aftermath Map Pack on Playstation Network.

The Cloven make their first actual physical appearance outside of Multiplayer in Resistance: Retribution. They are seen more often in the Paris catacombs level, but are never encountered as a hostile enemy or ally to James Grayson, only with the exception of one Cloven that actually attacked Grayson during an action button sequence. Also, the Cloven can be killed for Skill Points in Luxembourg and the Paris catacombs.

The Cloven replace the Chimera as one of the opposing factions in the five multiplayer modes in Retribution. They are the only playable faction in Deathmatch. In Assimilation, there is one Cloven at the start and the rest are Maquis soldiers. The Cloven's objective is to kill all soldiers before the timer ends, while the Maquis's objective is to have at least one soldier alive by the time the timer ends. All killed soldiers are converted into Cloven fighters upon respawning.

On their way to New York City by train, Dr. Malikov told Joseph Capelli about the many poor decisions he made and lists a few of them, which included the Cloven. 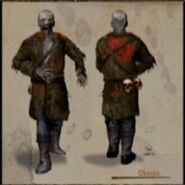 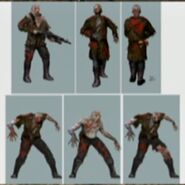 Concept art of a Cloven lair in Retribution.

The Cloven Multiplayer Skin in Resistance: Fall of Man.