A Chimeran tower is a monumental spire-like structure that towers over hundreds of feet tall. The towers were originally thought to have been constructed by the Chimera after the successful conquest of a region, but in reality, these structures have existed since the first colonization of Earth by the Chimera almost 60 million years ago, and have remained buried beneath the earth since their inexplicable disappearance from the planet.

The Chimeran towers were built on Earth long before the existence of humans. The towers themselves have the ability to manipulate the climate of conquered territories, gradually cooling the surrounding area to make it more suitable for Chimeran life. The towers also serve as large land bases that house considerable defense forces, and can also serve as production facilities for larger strains of Chimera such as Titans and Widowmakers.[1] After the events of Resistance: Fall of Man, the Chimera extended the use of the towers as conversion centers, using them to manufacture more advanced troops for their ongoing war effort.

Each tower comprises a single continental network, which is linked with every other major network via several large Hub towers. These Hubs power the rest of the network via nuclear fission, and are much larger than normal. These Hub Towers are often utilized as command centers for the Chimera. The Hub Towers are both boon and bane, however: the destruction of a single hub tower can result in the total dissolution of a tower network.

The real purpose of the towers is to bridge Earth to the Pure Chimera's home planet via a wormhole; through the enormous energy of the hub towers, the tower network releases a beam of energy directly into the sky which then arcs and links up with other beams to form a nexus encircling Earth, creating a "spatial distortion bubble" which is then channeled into a hub tower that opens the wormhole.[2][3]

The tower network was shut down and buried deep beneath the earth after the Pure Chimera were forced to abandon the planet following a catastrophic war against an unknown alien race.[4] The towers remained buried for millions of years until the Chimera's return in the early 20th century. Curiously, most of the towers were buried underneath present day major cities. When the towers are fully excavated, they telescope out of the ground and rise above the surface, explaining how they can tower above the city skylines.

Since the Chimera's return following the Tunguska Event, the invaders saw to their main goal in excavating the tower network during their military advance. Initially, humanity had erroneously thought that the towers were constructed by the advancing horde, until the British military tried to seal off a Chimeran tunnel nexus in Nottingham in July 12th, 1951; in which Lt. Stephen Cartwright noticed that the Chimera were digging Nottingham other than tunnels. Eventually, Cartwright and Sgt. Nathan Hale discovered an excavated tower in Cheddar Gorge. This single fact changes everything humanity knew about the origins of the Chimera. Hale soon discovered that the Chimeran power conduits, which were scattered all over the country, were linked to the towers. Hale entered a tunnel in Bracknell and followed a conduit for several miles until reaching the hub tower known as C-03 in the London borough of Lambeth.

Hale concluded that destroying the A-0 tower in central London will kill all the Chimera in Britain. On July 14th, joint British and American forces assaulted the hub tower during the Battle of London, in which Hale entered the tower and reaches its reactor core, and subsequently destroying and overloading it. As a result, the tower was destroyed in a massive explosion and causing a chain reaction which further destroyed the entire tower network throughout Britain, effectively killing the Angels and by extent eradicating all of the Chimera based on their hive mind dependency on the Angels.

One month after the liberation of Britain, the Chimera invaded the east coast of the United States and presumably dug up the hub tower in New York City. Rogue SRPA scientist Richard Gorrell attempted to use a tower, called the Conversion Tower, near Union City, New Jersey in capturing human beings from a nearby Protection Camp and creating a underdeveloped Leviathan and controlling it with Gray Tech components.

Tom Riley and Ellie Martinez traveled to the Conversion Tower by Carriers in rescuing the abducted victims, among them were Tom's family Natalie and Rachel Riley. Natalie was already infected and, too late to save her, was forced to be euthanize by Tom in preventing her from being converted. Fortunately, Ellie was able to rescue Rachel and other uninfected survivors. Rather than escaping with the survivors, Tom remained to stop Gorrell. Upon finding Gorrell and his creation, Tom fought the Leviathan after it loses control from Gorrell. Tom managed to incinerate the giant Chimera inside the tower's power core and a causing chain reaction. Gorrell appears to attack and stop Tom from escaping, but the fireman overpower him and quickly slash his Fire Axe into Gorrell's neck, killing him. Tom escape just in time before the tower explodes.

Following on the events of the Battle of London, British and Maquis forces worked together in destroying the Paris hub tower in order to liberate Western Europe in Operation Overstrike. On September 6, Major Cartwright led an assault on the Paris tower and subsequently destroying it, successfully causing a explosive chain reaction that destroyed the the tower network across Western Europe.

British and Allied forces continue to push through the continent over the next two years and become locked in a desperate battle to try and destroy a hub tower in Warsaw, Poland. While standing in the shadow of the ruined St. Basil's Cathedral in Moscow, Russia, Grayson encounters a large Chimeran tower greatly overshadowing the human architectural achievement in its gaze.

By the events of Resistance 2, several towers have already been excavated all over the world. One is even used as a research base for SRPA in Bryce Canyon, Utah. On May 15, 1953 the Chimeran fleet began an assault on the United States after breaching a section of the Liberty Defense Perimeter, with the intention of activating the Chimeran towers that are known and hidden in America, with Daedalus activating the already excavated hub tower at Bryce Canyon. After the events in Bryce Canyon, Echo Team traveled and secured Chicago and allowing Dr. Fyodor Malikov to deactivate the city's hub tower in turn shutting down the entire tower network in America. However, the tower was remotely reactivated by Daedalus from the Holar Tower in Iceland. Afterward, every fully excavated tower on the planet are activated into channeling arcs of energy into the sky.

In the co-op campaign of Resistance 2. Specter Team was tasked in destroying Chimeran reactors in Bryce Canyon during the Operation Crucible which, on June 9, 1953, resulted in destroying several Chimeran towers in the region similar to Nathan Hale's action in the Battle of London. In the another co-op campaign, Specter Team was also tasked in disarraying the Holar Tower and preventing Daedelus from constructing the Prometheus Weapon.

On June 26, Daedalus and the Chimeran fleet excavated a rather larger tower in the Chicxulub crater in Mexico, where the fleet also served as a conduit for the tower network to be channel to the Chicxulub tower and its flagship. The remnants of Echo Team and SRPA prevented the Chimera's intentions by destroying the fleet with a fission bomb and seemingly stops them from completing their goal. The aftermath, however, revealed that Daedalus had succeeded in fulfilling his purpose in bridging direct physical contact with Earth to the Chimera's homeworld.

The events that transpired at the Chicxulub crater revealed that the fission bomb only "kick starts" the tower network, surging all energy toward New York City and creating a wormhole over the city. What happened afterward suggest that the wormhole bridge a portal to the Chimera's homeworld. The New York tower also appears to act as a central hub for the entire tower network.

The New York tower, which was powering the wormhole, was deemed the greatest Chimeran threat in the United States at the time, in which SRPA and the remnants of the United States military launched an desperate all-out assault on the city in an effort to destroy the structure; however, the attack was overwhelmingly crushed.

By August 1957, the tower network served in cooling Earth in order to make it more hospitable for the Chimera and further endangering the human race with extinction.[5] Former Sentinel Joseph Capelli managed to destroy the New York tower by crashing a Terraformer into it, which not only permanently closes the wormhole but also disrupting the flow of the power surge throughout the tower network across the planet, causing them to revert the climate change caused by the terraformation process, giving humanity an advantage to finally defeat the Chimera.[5]

By May 1953, there are a reported 58 known towers that were excavated across the world, including hub towers and excluding others that had been destroyed over Britain and Western Europe.

The Chimeran Tower in Somerset.

The London Tower, some seconds before its destruction. 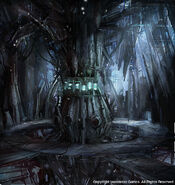