"If the Chimera were able to do this in two weeks, then what would we find in France and Germany, which the Chimera had been occupying for two years?"
―Rachel Parker[src]

Chimeran Gun Towers are large, anti-aircraft structures used by the Chimera. They were built along the European coastline in repelling human invaders. Over the course of the two years that the Chimera had occupied Europe, they built several Gun Towers all over the northern coast of the continent, making any kind of aerial invasion impossible. They only appear in Resistance: Retribution.

Maquis Intel stated that Rotterdam was clear of any defenses, and so for a brief time there would be an air corridor for the British to send their troops over to Europe. But two weeks later when Operation Overstrike began, the coastline of Rotterdam had already been fortified by the Chimera, indicating just how fast they can build.

When First Squadron attempted to fly over Rotterdam, many VTOL aircraft were shot down and the survivors scattered all across Rotterdam. Steven Cartwright, First Squadron's commanding officer, ordered the survivors to destroy these Gun Towers to ensure that Rachel Parker's Second Squadron does not meet the same "welcome" the First Squadron received. Colonel Roland Mallery and Cartwright managed to destroy two Gun Towers while Lieutenant Raine Bouchard destroyed a third. The last tower was destroyed by Mallery and James Grayson, clearing an air corridor for the second squadron.

The Gun Towers are equipped with a large single-shot, anti-aircraft gun. When it fires, a large shell is ejected from the structure. 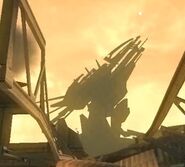 The design of the Chimeran Gun Towers are similar to the turret in Ratchet and Clank: Up Your Arsenal that was used to destroy the first Biobliterator.