Anti-Aircraft (AA) guns (AAG) were created as a direct response to the fast moving fighter jets and VTOLs used by human military forces.

The turrets can be seen stationed atop skyscrapers in Chicago firing at passing jets. In Iceland, Nathan Hale and Echo Team were tasked with planting explosives on several turrets which had been set up in a former military base station near the Holar Tower.

There is a slight resemblance between the Chimeran Gun Towers and the AAGs as the AAG fires missiles or explosive projectiles. However, they could not aim at the ground due to fixed joints. 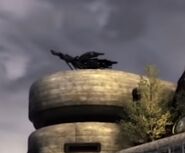