"Sir I was just scouting up ahead. No sign of the convoy, but you guys aren't going to believe what I sa-AAARRGH!!!"
―A Black Ops soldier explaining to Nathan Hale and a surviving group of Black Ops before being killed by a Chameleon[src]

Chameleons are a strain of Chimera that first appears in Resistance 2.

The Chameleon is presumably equipped with a device that provides active camouflage, meaning it can turn at least partially invisible, and melees the player-killing him/her in one hit with its claws. The cause for a Chameleon's camouflage is due to a special Chimeran cloaking device grafted on its body along with its cooling unit. A Chameleon comes equipped with multiple razor-sharp blades on its fingertips, which are sharp enough to impale and tear a human in half.

They show up in both forested levels and on Chimeran battleships. They usually attack solo or in groups of two. However, on higher difficulties the player may be attacked by groups of three at a time. 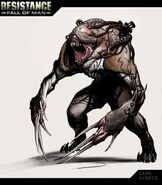