A Burrower is an armored worm-like vehicle used by the Chimera to dig tunnels. It is also a transport capable of inserting Chimera directly into battle at a moment's notice. In Resistance: Fall of Man, the Burrower is described as a purely mechanical vehicle, while Resistance: Retribution states that it is a bio-mechanical creature composed partly of living tissue.[1]

Despite being unarmed, Burrowers deals a great deal of damage on enemies that are exposed to the excavating teeth of the creatures' "face". Outside its combat duties, Burrowers are used to develop Chimeran infrastructure such as excavating buried Chimeran towers, and are primarily responsible for carving the network of tunnels throughout Britain to accommodate the Chimeran supply lines.[2] These same tunnels are also used to protect the power conduits found near Chimeran structures.

In Chesire a Burrower can be briefly seen when the player is traversing the underground tunnels. It crashes from one wall to another right in front of the player, but the movement of the machine is so quick that it is difficult to attain any real details. In the final level of Cheshire, during the sub-level "Angel", the Burrower breaches the room and deploys Chimeran troops from it's "mouth." The player gets to see only the frontal part of the Burrower.

Multiple Burrowers are seen throughout certain parts of the game, digging tunnels as access ways for Chimeran forces and allowing the player to reach his/her destination. They are seen more prominently during the siege of the Maquis' fortress base in Luxembourg, such as when a Burrower kills Dr. Claude Bouchard. In Where Nightmares Live, below the Paris Catacombs stronghold, a Burrower serves as a boss fight for the player.

It is stated that a Burrower emits toxic fumes, leaving traces of it within the tunnels it creates, and is able to use its fumes as a weapon by "spitting" a ball of fumes from its "mouth." This does not appear to happen in the original game.

When the Burrower's health reaches the half-point, it will retreat further down into its hole. More toxic gas will be released, but instead of Hybrids or Steelheads, Hunter Drones will emerge. Take them out and go deeper into the hole. Repeat the process until the Burrower finally explodes in a burst of fire. Throughout the fight, the Burrower can shoot balls of toxic gas that will deplete the player's health, and must be very careful. The player can always retreat out of the hole where there is plenty of health and ammunition lying around. 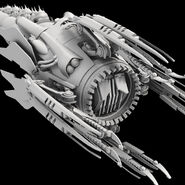 Pre-Rendering of a Burrower. 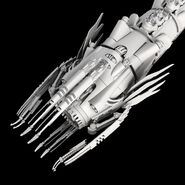 Burrower viewed from the top.