The British Armed Forces, also known as His Majesty's Armed Forces, are the military services responsible for the defence of the United Kingdom, its overseas territories and the Crown dependencies.

The British military's numbers had been severely reduced by the war with the Chimera in the first three months, after which they resorted to guerrilla and unconventional warfare when the Chimera invaded Britain on October 1950. It is during the occupation that British military intelligence learned that the Chimera were commanded by Angels and were able to capture one for exchange with the United States for military support. However, the exchange ended in disaster during Operation Deliverance when heavily concentrated Chimeran forces annihilated American forces in York on July 11, 1951.

After the failed "American Resupply", the British kept fighting hard pressed in small skirmishes and special operations until the final joint assault in the Thames River during the Battle of London, which culminated in the destruction of the Chimeran Tower in London and eradication of the Chimera throughout the United Kingdom on July 14.

Following the end of the Chimeran occupation, the British participated in the liberation of mainland Europe in Operation Overstrike and were pushing back the Chimera through Eastern Europe. By 1953, the British were already preparing to enter into Russia. Unfortunately, they were pushed back by the Chimera and once more reduced to a guerrilla force as of 1957.

(left) A hand-painted recruitment sign as seen during the Manchester level. (right) The real-life counterpart that was used during the First World War. It was made in 1915 and was published by the Parliamentary Recruiting Committee.

(left) Another hand-painted recruitment sign. (right) The real-life counterpart that was used during the Second World War by Canada. It was published between 1939 and 1945 for the Royal Canadian Air Force.
Add a photo to this gallery

A British Army flag that appears in Resistance: Retribution.
Add a photo to this gallery

Stephen Cartwright inspecting the corpse of a deceased British soldier.

British soldiers running towards the frontine during Operation Shear.

A British soldier shooting at a Stalker.

British soldiers on the battlefield in Manchester. 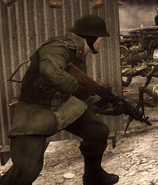 A British soldier fighting a Leaper.

Retrieved from "https://resistance.fandom.com/wiki/British_Armed_Forces?oldid=68013"
Community content is available under CC-BY-SA unless otherwise noted.