"Hey mate, the lads in black, they on your side?"
―British Army sniper in Nottingham

Black Ops are the military arm of the Special Research Projects Administration, as depicted in Resistance 2, they are almost always seen in SRPA facilities. They commonly wield the M5A2 Folsom Carbine in battle.

In appearances, they distinctively wear helmets, gas masks, and airtight suits, to keep Crawlers or any other Chimera from infecting them with the Chimeran virus. However despite their gear, Black Ops can fall victim to Spinners, which don't need to enter a victim's airway or bite them, as seen in Bryce Canyon where Nathan Hale and Victor Company discovered the remains of Dr. Fyodor Malikov's Black Ops escort cocooned by Spinners.

Following or prior to the events of Operation Deliverance, Black Ops soldiers have been dispatched in Chimera-occupied England and have been apparently conducting secret U.S. operations to learn more about the Chimera, while remaining discrete from British and regular American forces.

Nathan Hale only encountered the presence of Black Ops from finding their corpses, along with experimental weapons such as the XR-005 Hailstorm and the XR-003 Sapper. Radio messages or an encrypted Morse code message can often be heard from the deceased soldiers' radio headset. It is revealed from these coded messages that the Black Ops have been trailing Hale since the beginning of Operation Deliverance. Following the aftermath of the Battle of London, a Black Ops squad confronted Hale at gunpoint and extracted him out of England.

Black Ops seen in Fall of Man wear specialized airtight suits, green armor vests, helmets with gas masks, backpacks with what seem to be their air supply and apparently providing energy or even a signal for their chest-mounted video cams to transmit to HQ, silver armguards, various pouches on their utility belt (likely for ammo), black leg pads, black assault boots, and two ammo pouches strapped to their right thigh.

A Black Ops skin can be unlocked for multiplayer by completing the game's campaign on Superhuman difficulty.

The Black Ops play a much larger role, serving in fighting alongside Nathan Hale. As revealed in the aftermath of Fall of Man, the Black Ops purposely extracted Hale for his induction into the Sentinel Program. During the invasion of America, the Black Ops serve to supplement the United States Army as the main fighting force in Gray Territory. Throughout the campaign, the Black Ops are often overstretched and suffer heavy casualties, largely due to the burden of having to combat the Chimera throughout the country. Victor Company is the most notable Black Ops unit that accompanies Lt. Nathan Hale throughout the campaign. Additionally, aside from fighting in Gray Territory, elements of Black Ops have also been assigned to the LDP. By the events of Operation: Black Eden, the LDP had been destroyed, and Black Ops units could only barely afford to protect the last remaining Protection Camp in Baton Rouge, Louisiana. Additionally, the destruction of the LDP had left their manpower sapped, and Black Ops units have been reduced to a handful, most notably with Victor Company having been reduced to team-sized level and only Victor Team and X-Ray Squad are noted to be active.

Like in Fall of Man some Black Ops are found dead with weaponry that the player may use such as the Splicer. They wear a more streamlined uniform giving the soldier better maneuverability in combat. As noted below, they don't appear to wear airtight suits, and instead wear olive drab uniforms complete with armor vest, leg pack, hip pack, backpacks with the chest-mounted video cams and a radio, white leg pads, white armguards, and green boots.

Corpses of Black Ops appear in New York City in the years following SRPA's botched mission in attempting to attack the New York Chimeran tower. Throughout the campaign and while never actually seen in game, radio broadcasts and collected intel mention units of unidentified dark clad military personnel moving through Chimera territory and aiding with the evacuation of civilians. A radio transcript can also be heard during the end credits, elaborating on a group of soldiers bearing a similar description to SRPA's Black Ops defending a civilian field hospital in Charleston, South Carolina against a Chimeran onslaught. This suggests that SRPA and to a lesser extent the US Army is still operating, albeit in a significantly diminished capacity.

With the destruction of the Chimeran tower in New York, it is heavily implied that the United States Armed Forces had been reconstituted and that Black Ops would have been reintegrated.

The Black Ops multiplayer skin can be acquired and used, as a pre-order bonus, which has now been made available for public purchase on PlayStation Network.

Similar to their presence in Fall of Man, Black ops troops never actually take any major part in the main campaign. However, their corpses can be found littered throughout the events of Resistance: Retribution including inside the Rotterdam Gun Towers and in various locations throughout the Allied Base in Luxembourg.

An British Ministry of Defense Intel can be found documenting repeated intrusions by these operatives on major Maquis operations up to and including the events of Operation Overstrike as well as the latter's growing distrust and agitation of the former. While the overall relationship between the Maquis and SRPA is never made completely clear what can be gathered is that Black Ops troops were secretly attached to Operation Overstrike as part of an agreement coordinated between the US Chief of Staff and Colonel Rachel Parker to observe James Grayson and oversee his eventual extraction at the hands of SRPA, similar in fashion to their interest in Nathan Hale in Fall of Man. Why this doesn't occur at the end of the game is unknown.

Black Ops troops participated alongside regular Army troops in the failed defense of SRPA Station Kali at Ellis Island. By the time Tom Riley and Ellie Martinez arrived at the base, most of them were killed. They also defended the Union City Protection Camp and evacuated civilians to the radio tower after the Chimera broke into the camp. While most of the Black Ops troops died in the defense, one surviving Black Ops soldier directed Tom to the radio tower to find his family. Black Ops soldiers are also playable in the multiplayer mode.

A Black Ops soldier in Iceland.

Black Ops soldiers in a VTOL.

Black Ops soldiers in the back of a M35 transport truck.

A Black Ops soldier being attacked by the Chimera during an ambush.

Black ops during an ambush.

A cloaked Chameleon about to kill a Black Ops soldier.

A Black Ops soldier firing his weapon at Grims.

A Black Ops soldier in heavy combat with the Chimera in Chicago. 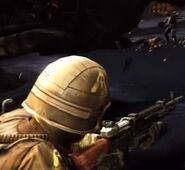