The America First - America Only (AFAO) Website is the website of the AFAO newsletter, and was run by Alliance for American Autonomy.

The website was discovered by trying the phrase as a domain name after receiving a tele-correspondence email from the Getawarjob.com recruiter Email address.

A clipping from the AAA's newsletter is posted on specific dates, typically coinciding with the results of a Project Abraham vote. The first two issues were one page long, while the newer issues are two pages in length. 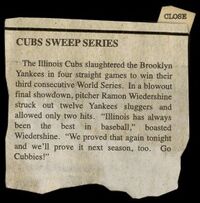 The Illinois Cubs slaughtered the Brooklyn
Yankees in four straight games to win their
third consecutive World Series. In a blowout
final showdown, pitcher Ramon Wiedershine
struck out twelve Yankees sluggers and
allowed only two hits. "Illinois has always
been the best in baseball," boasted
Wiedershine. "We proved that again tonight
and we'll prove in next season, too. Go
Cubbies!"

Save America - Fight Back[] 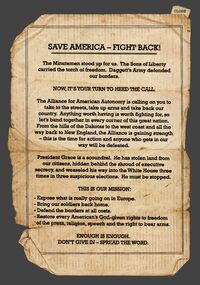 SAVE AMERICA - FIGHT BACK!

The Minutemen stood up for us. The Sons of Liberty
carried the torch of freedom. Daggett's Army defended
our borders.

NOW, IT'S YOUR TURN TO HEED THE CALL

The Alliance for American Autonomy is calling on you to
take to the streets, take up arms and take back our
country. Anything worth having is worth fighting for, so
let's band together in every corner of the great nation.
From the hills of the Dakotas to the west coast and all the
way back to New England, the Alliance is gaining strength
- this is the time for action and anyone who gets in our
way will be defeated

President Grace is a scoundrel. He has stolen land from
our citizens, hidden behind the shroud of executive
secrecy, and weaseled his way into the White House three
times in three suspicious elections. He must be stopped.

THIS IS OUR MISSION:


- Expose what is really going on in Europe.
- Bring our soldiers back home.
- Defend the borders at all costs.
- Restore every American's God-given right to freedom of
the press, religion, speech and the right to bear arms.

ENOUGH IS ENOUGH.
DON'T GIVE IN - SPREAD THE WORD.

The November 1st rally was a huge success. We made contact with hundreds
of new members and passed out copies of the latest newsletters - we'll get to the
bottom of this Project Abraham nonsense. 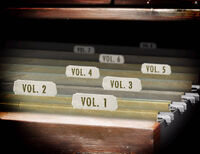 Clicking on the first filing cabinet now leads to an archive page, which allows viewing of past AAA Newsletters. 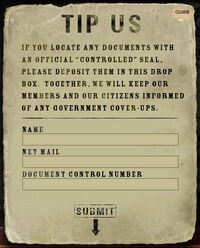 A tip box was placed on the cabinet, allowing people to submit Document control numbers of highly sensitive, top secret documents, along with their name and 'netmail' address.

TIP US
IF YOU LOCATE ANY DOCUMENTS WITH
AN OFFICIAL "CONTROLLED" SEAL,
PLEASE DEPOSIT THEM IN THIS DROP
BOX. TOGETHER, WE WILL KEEP OUR
MEMBERS AND OUR CITIZENS INFORMED
OF ANY GOVERNMENT COVER-UPS.

After submitting a document control number, the user receives an email at the address they provided:

Following the verification link brings up a confirmation message.

Thank you for your efforts to verify your net mail address. 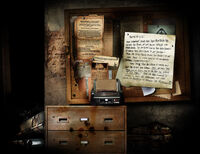 On August 29th, after the reboot of the SRPA Terminal and the beginning of the invasion, AFAO.com was "destroyed." The seventh issue of America First America Only was moved to the archived issues drawer and replaced by a note. The tip box has been removed and replaced with a fax machine, the printing press animation has been replaced with an image of the destroyed machine, and all other clippings cannot be clicked on. 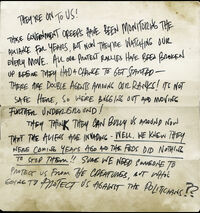 THEY'RE ON TO US!
THOSE GOVERNMENT CREEPS HAVE BEEN MONITORING THE
ALLIANCE FOR YEARS, BUT NOW THEY'RE WATCHING OUR
EVERY MOVE. ALL OUR PROTEST RALLIES HAVE BROKEN
UP BEFORE THEY HAD A CHANCE TO GET STARTED -
THERE ARE DOUBLE AGENTS AMONG OUR RANKS! IT'S NOT
SAFE HERE, SO WE'RE BUGGING OUT AND MOVING
FURTHER UNDERGROUND!
THEY THINK THEY CAN BULLY US AROUND NOW
THAT THE ALIENS ARE INVADING - WELL, WE KNEW THEY
WERE COMING YEARS AGO AND THE FEDS DID NOTHING
TO STOP THEM!! SURE WE NEED SOMEONE TO
PROTECT US FROM THE CREATURES, BUT WHO'S
GOING TO PROTECT US AGAINST THE POLITICIANS?? 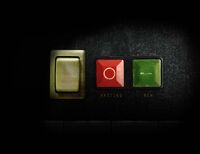 The fax machine has been updated with a small blinking red light in its lower right corner. Clicking on it zooms into the area, showing that it is blinking above the text "waiting." It is also next to a non-flashing green light that sits above the text "new." 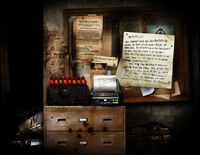 Three days after the fax machine's activation, a message was faxed to the device. Clicking on the message brings up a list of American cities. To the fax machine's left is a bulky device counting down to 3 PM EST on October 27.

On October 27, after the end of the countdown, a clipboard appeared on the wall. Clicking on the phrase BEGIN RESEARCH leads to the Metastasis game.

The government is powerless to stop us - they tried with Project Abraham, but that only resulted in more death and disease. And now, because of their incompetence, the aliens have come to America. It's our job to stop them. We at the Alliance have infiltrated the military's research networks and found a training procedure called Metastasis. It tests your readiness to identify and eradicate chimeran tissue on a cellular level. The only way we can defeat the enemy is by tearing them apart from the inside out. These creatures have infected millions, and it all started with microorganisms like the one seen here. It's time to enter Metastasis...